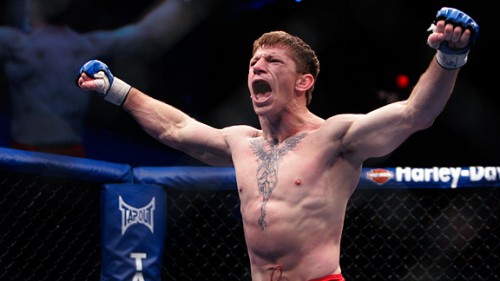 Mike Thomas Brown and Diego Nunes are headed towards a match up at UFC 125. The card takes place on Jan. 1 at MGM Grand Garden Arena in Las Vegas.

MMAJunkie reported that both fighters have agreed to the contest, and the bout will be announced shortly.

Back at WEC 36, Brown knocked out Urijah Faber to claim the WEC featherweight championship. He then defended the belt twice against Leonard Garcia and Faber. But at WEC 44, Jose Aldo knocked Brown out from the back mount and took the title.

Since then, Brown is 2-1 with wins over Anthony Morrison and Cole Province. He also holds victories over Yves Edwards, Mark Hominick and Jeff Curran.

Nova Uniao product Nunes made his WEC debut in 2008. He started his run with back-to-back wins over Province and Rafael Dias. He suffered his first career defeat when he dropped a decision to L.C. Davis. Since the loss, he has peeled off two more wins over Raphael Assuncao and Tyler Toner.

A pair of title fights will headline UFC 125. Featherweight champion Jose Aldo will defend his belt for the first time in the UFC Octagon as he takes on Josh Grispi. Frankie Edgar will defend his lightweight title against the only man to defeat him, Gray Maynard.