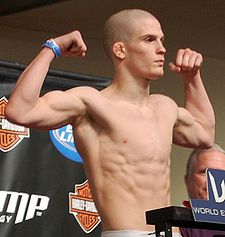 The WEC recently announced the bout and Koch gave his quick thoughts on the matchup in an email to ProMMAnow.com.

“Love the match up and just glad i got a fight!” Koch said. “This one should be fireworks!”

Koch was originally scheduled to face top contender Josh Grispi in the co-main event, but Grispi was pulled from the fight and given an opportunity to face newly-crowned UFC featherweight champion Jose Aldo at UFC 125 on New Years Day. He is 2-1 in the WEC, most recently defeating Bendy Casimir at WEC 49 by first round submission.

In a recent interview with ProMMAnow, after hearing the news that his fight with Grispi was off, Koch said he would continue training with the hope that the WEC could find a replacement. He also gave his thoughts on the WEC-UFC merger set to take place in 2011.

Rivera will make his WEC debut after going undefeated on the California MMA circuit.