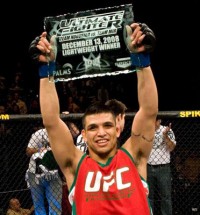 The Ultimate Fighter Season 8 winner Efrain Escudero’s recent release from the UFC came as somewhat of a surprise, given his not-so-horrible 3-2 record in the Octagon. But Escudero now has a new home, with Shine Fights announcing today that Escudero signed a multifight deal with the promotion.

Escudero is coming off of a loss at UFC Fight Night 22 on Sept. 15, where he was submitted in the third round by Charles Oliveira. Not long after the loss, Escudero, who missed the lightweight limit by a few pounds, received his walking papers.

His most notable win in the UFC came against Cole Miller at UFC 103, his first fight since beating Phillipe Nover at the TUF 8 Finale. But Escudero then lost to top contender Evan Dunham, followed by a win over Dan Lauzon and the loss to Oliveira.

“I’m very excited to have Efrain sign on with us,” Shine Fights COO Jason Chambers said in a written statement. “I have tremendous confidence in his abilities, and look forward to seeing him make waves in our growing lightweight division.”

Escudero is currently training with UFC veteran Drew Fickett, who won three fights in one night on Sept. 10 to win the Shine lightweight grand prix.

“Going to Shine is the first step to becoming a world champion,” Escudero said. “As far as my career goes, things happen, and I don’t live in the past. I’m excited to get this show in the road.”