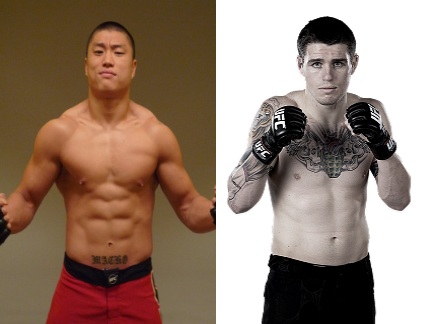 Finishing up our UFC 121 Prelims series is a middleweight match-up between South Korea’s Dongi Yang of Korean Top Team vs. Chris Camozzi, who fights out of Gumm MMA in Lakewood, Colo.

There’s not a lot of tape floating around of DEEP and Sengoku veteran Dongi Yang. His DEEP 31 bout against Keigo Takamori is on Youtube, but that was three years ago and he looks to be in much better shape now. In fact, he looks enormous.

This will be the South Korean’s UFC debut. He is undefeated at 9-0, and has finished all nine opponents, the last eight by TKO and his first bout by submission.

Yang’s most recent bout was in May of this year when he defeated Bill Sauress (5-5) via TKO due to punches just 1:07 into the fight at Trench Warz 12 in Saipan. Prior to that, he had not fought in over a year.

Yang has a military background and went to college. Guess what his major was… East Asian Martial Arts. He is a black belt in Judo and Taekwondo, as well as Yong Moo Do, so he is pretty well-rounded.

It will be interesting to see how he deals with fighting on the big stage against a well-rounded American MMA fighter. Yang did mention Chris Camozzi’s height and reach will create some challenges.

Camozzi fought and won his way into the house on The Ultimate Fighter season 11, but because he suffered a broken jaw in the fight he was unable to continue on the show. It was a tough break for the 23-year-old, but he did get to fight in the TUF 11 Finale against James Hammortree (5-2) in June of this year and won a unanimous decision.

Prior to that, Camozzi had back-to-back submission victories in regional shows.

I see this fight staying on the feet where Camozzi’s Western style boxing and Muay Thai striking will work better than the traditional martial arts punching of Yang. I don’t think Camozzi will be able to put him away but should be able to out-point Yang for the decision.

I could also possibly see Camozzi putting Yang on his back and using some ground an pound on him. Either way, I think Camozzi will take it. It’s very rare we see Asian fighters come in from a traditional martial arts background and do well in the Octagon. The wrestling,  BJJ and Muay Thai of the Western MMA fighters will more often than not prevail over Judo and Taekwondo.