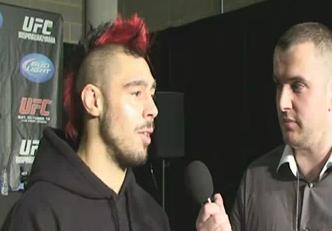 It’s a somber tone as Englishman Dan Hardy talks about his knockout loss to Carlos Condit at UFC 120 this past weekend in London, England. Hardy said,

“I came in in good shape. I was ready for a good fight. I thought things were going alright, but I got caught sleeping, got caught with my hand down. That’s the way it goes. That’s why it’s a sport.”

When asked if he regretted any of the smack talk leading up to the fight, Hardy said,

“I don’t. No I don’t. I say all those things partly to entertain myself and partly because I mean it. I’m coming in and planning on winning every fight, but 2010 wasn’t my year. It’s been a privilege to fight him and I’ve always been a fan but he caught me with a shot and taught me a good lesson. And it’s a lesson I’ll take back to the gym and work from.”

As for what’s next for Hardy, he has a few things to do in the U.K., then it’s right back to training. He said,

“I’m going to take a couple of weeks. I have got a few trips to take around the U.K. and then I’m headed back to the U.S. and back to the grind.”