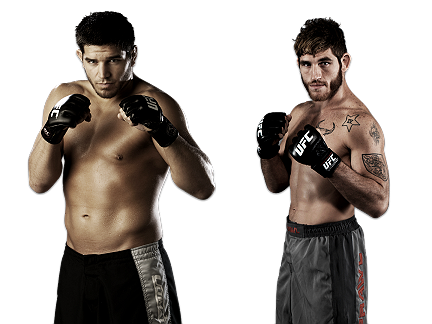 Both Patrick Cote and Tom Lawlor come into this middleweight bout having lost their last two fights. Rarely do fighters get to stick around the UFC after three losses in a row, so it is pretty safe to assume both Lawlor and Cote are fighting for their careers here.

Cote was submitted by Alan Belcher via rear-naked choke at UFC 113 back in May. His fight prior to that was the 10-minute dance he did with middleweight champ Anderson Silva that was cut short due to a knee injury at UFC 90 in 2008.

Lawlor’s most recent fight ended in a second round rear-naked choke submission at the hands of Joe Doerksen at UFC 113 back in May, and prior to that, he lost a split decision to Aaron Simpson at UFC Fight Night 20 in January.

On paper, Cote is Lawlor’s biggest name opponent to date and a win over him would prove he still belongs in the UFC. For Cote, if he ever wants another shot at UFC gold, he will have start by proving the Lawlor’s of this world are no match for him.

With Cote’s superior striking, takedown defense and experience, he should be able to finish Lawlor with a second or third round TKO.

Stay tuned for more previews of the UFC 121 Prelims.