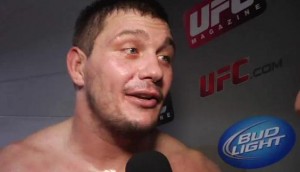 Mitrione-Beltran kicked off the televised portion of the card on Spike TV and what a kick-off it was. It was a great way to start the show and earned the former Purdue Boilermaker an extra $70,000 for “fight of the night”.

Mitrione does admit however, he was a bit disappointed and became frustrated when he couldn’t finish Beltran. He gives Beltran credit  for a good game plan and a tough beard,

“I really thought I was going to knock him out but his chin was a whole lot better than I gave him credit for. He barely tried to wrestle, he didn’t take shots, he didn’t do what I thought he was going to come to do. So good for him. It kept me from kicking him. — I had him on the ropes a couple of times, I’m positive I did. I hit him with some big shots and he ate them. Joey’s a tough dude.”

It’s important to keep in mind although Mitrione didn’t put Beltran away, this ex-football player only had two pro fights coming in against an opponent with 15 pro fights under his belt. With 12 wins and only three losses (before UFC 119), Joey Beltran has some big wins on his resume and the fact Mitrione dominated him and looked great doing it, speaks volumes about “Meathead’s” rapid progression.

Those who saw Mitrione’s post-fight interview with Joe Rogan inside the Octagon probably heard him tell someone they were fired. You may have been wondering who he was talking about and if it was a joke.

The person Mitrione was referring to was his manager, Malki Kawa. And apparently, it’s no joke.

Mitrione explained his reason for firing Kawa was because he was only able to secure him $5,000 in sponsorship money for this fight which Mitrione thought was way too low considering it was live on Spike TV. In addition to that, Mitrione claims Kawa told him his wife was bothering him about stuff that’s not her business. That did not sit well with the big man. He said,

Kawa is also the manager of Jon Jones and Thiago Alves, among others. In fact, Alves appeared with Kawa on Inside MMA back in April to discuss Alves’ medical condition and subsequent brain surgery.