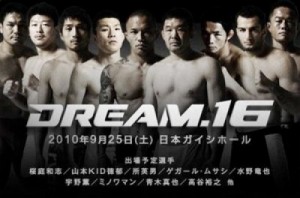 DREAM announced the addition of three featherweight bouts for the upcoming DREAM 16 event in Nagoya, Japan on Sept. 25, including several WEC veterans.

Former WEC 135-pound champion Chase Beebe (13-6) will face another former WEC combatant in Hiroyuki Takaya (13-8-1). Beebe recently stopped a five fight losing streak with a submission win over William Jochum, while Takaya stopped a two fight skid of his own by upsetting Joachim Hansen at DREAM 14 with a first-round KO.

Also, Cole Escovedo (16-5) makes his second appearance for the promotion — after winning his debut with a head kick knockout of Yoshihiro Maeda — against a revitalized Michihiro Omigawa (11-8-1).

Escovedo lost his last fight in July 9 under the Tachi Palace Fights banner to Michael McDonald. Before that, he’d won his first five fights since a three year layoff prompted by a staph infection that nearly brought his career to a halt. Omigawa, meanwhile, has bounced back from having a losing record to winning seven of his last eight, including a 4-1 mark for the Sengoku promotion.

The DREAM 16 card will also include a clash between former PRIDE fighter Mitsuhiro Ishida (19-6-1) and Akiyo Nishiura (11-5-1).