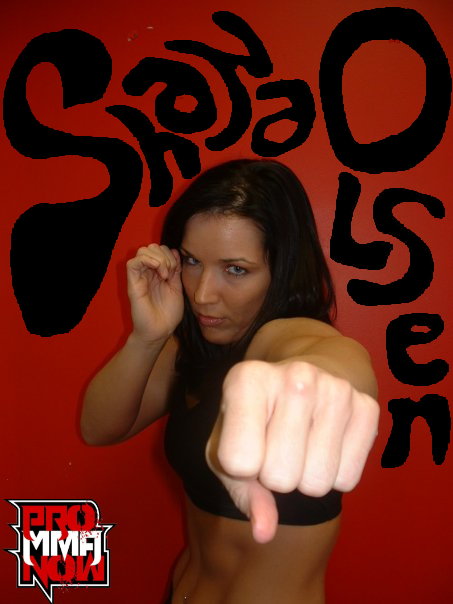 Shana Olsen (4-0) was recently in the news about her much publicized online beef with MMA women’s veteran Erin Toughill (10-2-1). Strikeforce had been trying to set up a fight between the two ladies, but plans fell through after Toughill had trouble making the 145 lbs. weight.

Toughill offered to fight Olsen at a higher weight, however, Olsen has her eye on the 145 lbs. title held by Cris “Cyborg” Santos and prefers to stay where the gold is.

Shana Olsen spoke openly to ProMMAnow.com this week about the whole Erin Toughill situation, and what she thinks of the veteran inside and outside the cage. She also talked to us about her big win over Yoko Takahashi, her development as a fighter and her future plans.

Kick back and relax as we chat with one of female MMA’s rising stars, the undefeated Ms. Shana Olsen…

ProMMAnow.com: Shana, thank you for speaking with us, how are you doing today?

Shana Olsen: I am doing great!  Just got done with training for the day so I am heading to the pool with my daughter.

ProMMAnow.com: Where do you train and who are your coaches?

Shana Olsen:  I train at the Minnesota Fight Factory in Burnsville, Minn.  Sergio Cunha is my head coach. I also have Shane Dezee for grappling/jiu-jitsu and Keith Spewynn for conditioning.

ProMMAnow.com: Strikeforce had been trying to put together a fight between you and longtime women’s MMA veteran Erin Toughill. Can you tell us first off all how did the idea of putting this fight together first come up and then why it fell through?

Shana Olsen: Well, this is actually the second time I was asked about fighting Erin for Strikeforce.  I was asked back in April about fighting her.  All in all, I have actually agreed to fight Erin on four different occasions.  I think this would be a great fight because we are both competent strikers.  This would be a stand up war with both showing strength and technique.  Unfortunately, until Erin can make weight to fight at 145, this fight won’t happen in Strikeforce, and I am signed with Strikeforce.  This fight fell through because Erin and her camp felt that she would be unable to make 145 pounds by the August 21 show.  This fight was touted as the contender match up for the next shot at Cris Cyborg and the 145 pound title.

ProMMAnow.com: Had you guys already signed contracts or bout agreements for the fight or had you both just verbally agreed to it? How far along in the process did it go?

Shana Olsen: We had both been signed by Strikeforce, but no bout agreement had been signed, we were in verbal talks about the fight when everything fell through.

ProMMAnow.com: How disappointed were you about the fight falling through?

Shana Olsen: I was very disappointed.  I have been anxious to get back in the cage since my fight against Yoko Takahashi in April.  This would have been a great opportunity to really test myself and continue to work towards my goal of being a world champion.  I know she was upset that I wouldn’t fight at a catch weight but I am really out to prove myself in the 145 pound weight class and out for that title.

ProMMAnow.com: Here’s my question. When the fight was cancelled, there were still like five weeks to go before weigh-ins… do you find it odd that she knew five weeks out that she was not going to be able to make weight? How do you explain that?

Shana Olsen: I can’t speak for Erin, and I don’t know what things could have been interfering with her training and keeping in shape, but I do know that back in May she knew that she was potentially going to be fighting in August or September and it seems she really didn’t do much to make sure she was in fighting shape.

ProMMAnow.com: Are you still going to fight on the Strikeforce Houston card? If not, do you know with who or when your next fight will be?

Shana Olsen: Unfortunately, I won’t be fighting on the Houston card as of now.  I am looking to future cards on Strikeforce. At this time, nothing is for sure and I don’t want to speculate until I am sure something is going to happen.

ProMMAnow.com: So, before this incident happened with Erin Toughill, what was your opinion of her as a fighter and a person? Is she someone you respected as a pioneer in women’s MMA?

Shana Olsen: As a fighter I think she has a lot of skills and talent.  She has faced some tough opponents in the past.  I guess we just have different ideas of how we should carry ourselves and how we should talk about our competitors, other fighters in the sport, and what we deserve.

Shana Olsen:  I guess the thing that bothered me is she went off on this rant all because she couldn’t make the weight and Scott was telling her she wouldn’t fight if she didn’t make the weight.  So instead of being classy about it she went off and blamed me for the fight not happening.  She was mad because I wouldn’t agree to fight her at a higher weight and was malicious about it for no reason.  Her inability to make 145 is not my problem, nor my fault. I have said my peace on that matter with my response and I haven’t given her or her rant much thought since then.

ProMMAnow.com: How do you think a fight between Toughill and Cyborg would end?

ProMMAnow.com: You have only been fighting professionally a little over a year, yet you are already ranked in the top ten. What do you attribute your success to?

Shana Olsen: Hard work and dedication.  Once I started training in MMA, I knew that this is what I wanted to focus on and that I wanted to be a world champion.  I have sacrificed a lot to get here and I know that this road is not easy for anyone, but I have a goal for myself and I can’t and won’t stop until I have achieved it.

ProMMAnow.com: What did beating a veteran like Yoko Takahashi in your last fight mean to you and where does that win rank on your list of accomplishments?

Shana Olsen: I rank that very high on my list of accomplishments.  She was the first ranked fighter I had the opportunity to fight and really was my breakout fight, where people really began to take notice at my skill level.  I was ecstatic to get the win and it really show me that this is where I am supposed to be and I am headed down the path in life I need to be on right now.

ProMMAnow.com: Takahashi is known as an expert grappler. How were you able to deal with her ground game and how is your own grappling development coming along?

Shana Olsen:  I really wanted this fight a lot because of her grappling skills.  This was an area of weakness for me and I really wanted to show how far I have come with it.  I think I showed I can hold my own, but I definitely also feel that there is much room for improvement.  But, I would say that this is the first fight where I really transitioned from my striking to my ground game easily.  I was relaxed not rushed and just kept active.  I continue to work on my grappling every day! I want to be a well rounded MMA fighter, exceptional in all areas.

ProMMAnow.com: Do you enjoy learning the ground game or do you prefer to strike?

Shana Olsen:  I have really come to appreciate the grappling and Juijitsu work we do.  I was very frustrated with it when I first started and there are always those days when things don’t always click like you expect them to, but I continue to learn and get better and that’s what I love about the training of this sport.  My striking continues to improve as well, I have learned to incorporate more knees and kicks into my combinations and have really worked a lot of my movement on my feet.

ProMMAnow.com: Where do you go from here Shana, what can we expect from Shana Olsen in the next 6-12 months?

Shana Olsen: I hope a lot more fights!  I want to continue to move up the rankings and fight all the top level competition out there.  My camp and I feel I would be ready for a title shot within the next six months and hope that this can come about.

ProMMAnow.com: Thank you so much for your time. Congratulations on all your success and we wish you the best of luck and look forward to seeing you back inside the cage. If you would you like to thank anyone or send any shout outs, go right ahead.

Shana Olsen: Thanks so much for taking the time to interview me!  I need to thank Sergio and the Minnesota Fight Factory, Keith at Fitu, Steve Gavin my manager, Performance MMA, PussOut Fight Gear, ClinchGear, Plasma Energy, and prettytoughfighter.com – people can check out my blog there! I also need to give a shout out to my family, Dan, Makalah, Landon, Christian, Bogie, and Susie, and all my training partners.  Thank you all for supporting me and helping me on this path!