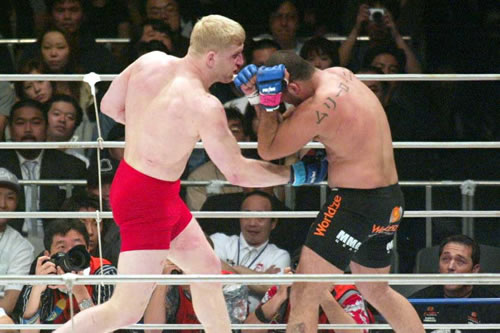 Both Sergei Kharitonov and Valentijn Overeem have signed with Strikeforce. The heavyweights join an already solid stable of fighters weighing in north of 205.

Overeem began his MMA career back in 1996. He has fought several of the game’s top fighters including Renato “Babalu” Sobral, Antonio Rodrigo Nogueira and Randy Couture. He recently put together back-to-back wins against Tengiz Tedoradze and Catalin Zmarandescu.

Kharitonov was once one of the top heavyweights fighting under the Pride FC banner. Since the promotion essentially dissolved he has hit a rough patch. Sing 2008, he has only had one MMA fight. At Dream 8, Jeff Monson submitted the Russian fighter with his trademark north-south choke. In his most recent action, Daniel Ghita stopped Kharitonov under K-1 rules in December.

The current Strikeforce heavyweight champion is Valentijn’s younger brother Alistair Overeem. Kharitonov also shares a hsitory with the champ. He lost to Overeem back in 2006, but returned in 2007 to knock him out.