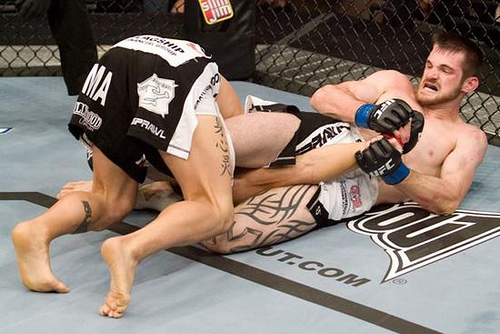 Dustin Hazelett’s time away from the UFC might not be as long as he hoped. The fighter will return to the Octagon at UFC 117 and take on fellow prospect Ricky Story. The card has still not been officially announced, but multiple media sources have reported that it will take place on Aug. 7 at the Oracle Arena in Oakland, Calif.

MMAJunkie reported the match up on Wednesday night.

Hazelett last fought at UFC 108. In his first fight in over a year, Paul Daley knocked him out in less than three minutes. He made his promotional debut back in 2006. His current record under the Zuffa banner stands at 5-3.

After dropping a decision to John Hathaway in his UFC debut, Story has won three-straight fights. In his last outing, he defeated TUF veteran Nick Osipczak by split decision at UFC 112. Story also holds victories over Ryan Healy, Brandon Melendez and Jake Ellenberger.

Headlining UFC 117 is a middleweight championship fight between Anderson Silva and Chael Sonnen.