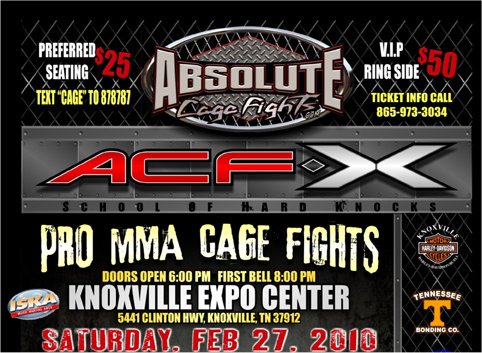 Knoxville based Absolute Cage Fights will be back in action this Saturday, February 27th, with “ACF-X:  School of Hard Knocks.”  The Pro-Am card is stacked with 9 amateur fights, and 5 pro fights, headlined by XFC veteran Shane Machette (1-1) vs. Gerric Hayes (1-1), and a co-main event of Devon Plaisance facing off against Eli Ayers.

The show will once again be at the Knoxville Expo Center, and tickets are available at the Absolute Cage Fights website, or by calling 865-388-1770.  Tickets are also available locally at Knoxville Harley-Davidson.  In addition to the 4 pro fights, there will be multiple amateur title belts on the line on the under card.

Check out some of the fight videos from Absolute Cage Fights’ last event here.