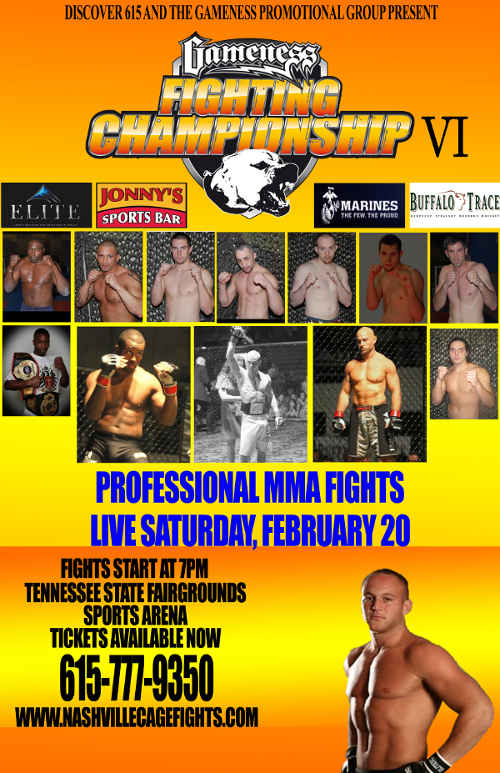 Gameness Fighting Championships was back in action again on Saturday February 20th, with “GFC VI″ at the Tennessee Sports Arena in Nashville, Tenn. Pro MMA Now (prommanow.com) was cage side for a full night of MMA including a Tennessee record 20 bout fight card, including 13 amateur and 7 professional fights, featuring UFC veteran Josh Schockman in the main event.

Round 1-  Leg kick by Vizcaya.  Another leg kick followed by a right hand scores for Vizcaya.  Hammonds to the clinch with Vizcaya’s back against the cage.  Knee delivered from Vizcaya from the clinch.   Hammonds answers with a knee of his own.  The fighters remain clinched against the cage.  Knee to the head from Vizcaya.  Vizcaya continuing to land  knees from the clinch.  Vizcaya with a big slam and is now in Hammonds guard.  Vizcaya postures for a shot, before being kicked off by Hammonds.  Vizcaya back into Hammond’s guard.  Both fighters are back on their feet now.  Vizcaya lands a huge right hand that drops Hammonds.  Vizcaya looking to finish with some ground and pound.  Hammonds is cut on his left eye as the round ends.  ProMMANow scores Round 1 for Vizcaya 10-9

Round 2-  Leg kick from Vizcaya.  Hammonds shoots for the take down, but it’s stuffed.  They separate and Hammonds goes for the single but ends up on his back.  Not much action on the ground as Vizcaya stands and backs away.  Back to the feet with Vizcaya scoring with an inside leg kick.  Vizcaya scores with a big right hand.  Hammonds scrambles and ends up on his back.  Vizcaya steps away and they are back to their feet.  Vizcaya misses with a big left hand and Hammonds looks for the take down again.  Vizcaya lands some devastating shots to the bloodied Hammonds.  More strikes from Vizcaya forces Hammonds to tap due to strikes.

Daniel Vizcaya defeats Shawn Hammonds by TKO in Round 2

Round 1-  Left hand misses by Higgins.  Alexander misses with a big right hand.  Both guys land jabs then separate.  Leg kick from Alexander.  Higgins answers with a kick but gets taken down as Alexander grabs his leg.  Higgins working a high guard and is controlling Alexander’s posture.  Alexander finally pulls free and postures for some big shots, but Higgins grabs an arm and secures it.  Alexander lands a knee trying to free his arm but the submission attempt is very tight.  Alexander has no way out and taps.

Round 1-  Leg kick scores by Weaver.  Nice kick to the body by Stallings.  Weaver misses with two rights, but gets double unders and slams Stallings to the canvas.  Weaver pushes Stallings to the cage and delivers some big strikes.  Stallings working to control the posture of Weaver.  Weaver uses the opening to land right hands to the body of Stallings, then lands two big elbows to the face of Stallings.  Weaver postures up for some more ground and pound, with Stalling’s back to the cage.  Grazing elbow by Weaver from the top scores.  Weaver stands and throws the legs to the side trying to pass, but Stalllings retains guard.  Big shots from Weaver score from the top.  Weaver stands and walks aways and they are back to the feet.  Stallings lands three big knees.  Weaver grabs one of his knees, and Stallings jumps and lands knees as Weaver holds on to his other leg!  The fight goes to the ground with Stallings in side mount and now in a position to land some offense.  He lands about 20 punches until the bell rounds.  Strong finish for Stallings to end Round 1.  ProMMANow scores Round 1 for Fred Weaver 10-9.

Round 2- Huge kick to the body by Stallings, followed by another.  Weaver is moving backward, as Stallings lands a huge right hand that drops Weaver.  Stallings follows up with a 8 or 9 punch barrage from the top forcing the ref to step in and stop the fight.

Dustin Ortiz def. Lucas Thomas by submission (arm triangle) at 1:00 of Round 1

Round 1-  Woods with an inside leg kick.  Woods lands with another kick, then a snapping inside leg kick.  Woods is landing devastating kicks to Morrow’s legs.  Both guys land kicks at the same time and Woods slips to the mat.  Back to the feet.  Morrow lands with a kick to the body, then eats a straight right hand from Woods.  Morrow misses with the superman punch as Woods steps back.  Woods with more kicks.  Morrow throws a kick and Woods counters with a right that drops Morrow.  Morrow quickly back to his feet.  Woods lands another blistering kick.  Morrow’s leg looks like pink chewed up bubble gum.  The fighters exchange and Woods catches a finger in the eye.  Brief stoppage for Woods to recover.  Woods fakes with his hands and steps in for another leg kick.  Right hand from Woods and Morrow is down briefly.  Morrow scrambles to his feet only to eat another kick from Woods.  Woods doubles up with kicks to the lead leg of Morrow with :10 seconds to go.  That was a totally dominating round by Woods.  ProMMANow scores Round 1 for Timothy Woods 10-9.

Round 2- Woods starts Round 2 just like round 1 with more kicks.  Woods goes head hunting but misses.  Inside leg  kick from Woods scores.  Woods is attacking Morrow’s lead leg.  Woods is destroying that leg now… I’m not sure how Morrow is still standing.  To the clinch with Morrow landing a couple of knees before Woods disengages.  Kick to the body from Morrow scores.  To the clinch.  Woods lands two big knees to the body.  Morrow misses with a right as Woods steps in to clinch briefly.  They separate, then Morrow lands to the body with a kick, then misses with the superman punch again.  Morrow is trying to catch the leg kicks now.  Woods lands one straight to the groin, but Morrow is good to keep fighting.  Morrow throws his right hand but Woods lands two right hands.  Morrow lands a big punch that staggers Woods.  Morrow follows up with another right hand that drops Woods.  Morrow follows Woods to the ground and lands some big ground and pound.  There is no answer from Woods and the ref steps in and stops the fight.

Round 1-  West with the right hand to start.  Fletcher shoots in for the take down but West just throws him off and to the ground.  North/South position with West on top.  Fletcher looking for a leg, but eats a big right hand is now on his back.  West drops a huge right hand and it’s over!

Dustin West def. Marcus Fletcher by TKO (strikes) at :50 of Round 1

Round 1- Shockman with a straight left hand that drops Cook.  Shockman follows him to the ground, lands two big right hands and it’s all over!