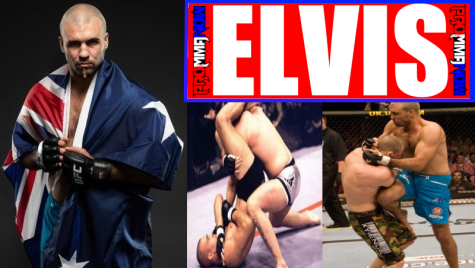 When it was first announced the UFC would be holding an event in Australia, UFC President Dana White said in a MMAJunkie Radio interview there would be one person for sure involved, and that was Elvis Sinosic. White said, “We love that kid. He’s the best. He’s always been such a good kid to us. …and he’ll be part of our promotion over there no matter what.”

And now, this Saturday, Elvis “The King of Rock n’ Rumble” Sinosic, will enter the building at UFC 110 to take on Chris Haseman in the UFC’s first ever event in Australia. Pro MMA Now (www.prommanow.com) was able to catch up with “The King” this week to talk about this groundbreaking event, find out how it feels to be fighting in the world’s premiere MMA organization right in his hometown, get his thoughts on Haseman, and much more. Elvis returns!

Hello Mr. Elvis Sinosic, thank you for taking the time to speak with us at Pro MMA Now (www.prommanow.com). It’s been over a year since we last spoke. The last time we talked you had been concentrating on your academy Sinosic Perosh Martial Arts (www.spma.net.au). How are things at the school and how have you been?
It has been a while, good to chat to you again. The school is doing great, both our locations are flourishing. We’ve also recently upgraded the facilities and now have cage panels and padded walls to add to our MMA program. We’re lucky to have a great school with a group of great students which makes going every day a pleasure.

I would imagine this has to be a very big and busy week for you, with the UFC coming to Sydney. Does it feel like a dream come true, and what are things like over there for you this week? How has the experience been so far – I see the photo of you and Forrest, you must have gotten to reunite with some old friends?
Yes the week or so has been hectic. Doing lots of things in preparation for the upcoming UFC. Staying busy with the PR schedule. Training hard and so forth. It’s all part of the job so I enjoy doing it all. The training overseas was great. Not only did I get to catch up with old friends I also had the opportunity to make new friends. On top of that I also got lots of great training as well. It was a great time and I got a lot out of it.

Now, you have been out of the cage for some time, since 2007, if I’m not mistaken. What are the nerves like as fight day gets closer and how are you dealing with that?
Nerves are just part of the process. I try and use it in a positive way. I think of it as my body’s preparation for the fight to come. I don’t think of it as nerves but early adrenaline, where the body is preparing itself for the experience ahead. It keeps me on my toes and ready.

We heard the tickets sold out over there very quickly for UFC 110. What has the fan reaction been like so far with the UFC in town, and has there been a lot of Australian press coverage so far?
Yes the show sold out in record fashion which was great for Australia. The most common question I get now is, “Can you get me any tickets?” I have to say the press has been great. Ever since the official launch, they seem to have really made an effort to get to know the sport and the athletes involved. It’s great to see that as it gives a much clearer perspective of what is going on to the new fans which are just discovering our sport. They are taking the correct steps to educate themselves and their audience.

That is great to hear. Now you are getting a shot at the guy who gave you your very first professional loss, Chris Haseman, a fellow Australian. How amped are you for this fight and getting a chance to redeem yourself?
I’m looking forward to the fight because it is an amazing opportunity to fight in the UFC in Australia. Redemption, revenge, or any of those thoughts don’t cross my mind. What happened in the past won’t change because of what happens in the future. What is important is that I give my best and don’t underestimate an experienced and dangerous opponent.

Have you and Chris Haseman’s paths crossed since your fight 13 years ago, and is there still a rivalry there? Any bad blood?
Yeah I’ve crossed paths with Chris several times and there has been no bad blood. Definitely none from my side of the fence. There has been a bit of trash talk from the other side, but I think that’s just about amping up for the fight.

What is your opinion of Chris Haseman as a fighter, how have you both progressed from your first fight, and how do you match up now?
It’s been a long time since the first match. We’ve both had a long time to learn new things. I have no doubt we have both greatly improved and are different fighters from when we first faced each other 13 years ago.

What does the future hold for Elvis Sinosic? What will you be doing after this fight – is it back to the academy and business as usual?
After the fight it will be back to business as usual. Later on I am also looking forward to taking a short break to sit back and relax and let the body wind down. Then after that we’ll take it as it comes.

Elvis, thank you so much. It has been a true honor. You are a real class act. I’m so happy for you getting to fight on this card. When Dana White was asked about the UFC coming to Australia, he said you would definitely be a part of the show, so I’m really glad that worked out. Is there anything you would like to say to the fans, or would you like to send any shout outs?
It’s an honour to be able to fight for the UFC in my home town, and means a lot to me. I’ve worked hard in the lead up to try and make sure I put in the best performance possible. It has been a hard road, a challenging one, but ultimately very worthwhile. I would like to say thank you to all my fans for their continued support. Thank you to my friends and family. Thank you to all my students at SPMA. Thank you to everyone who helped me along the way. Thank you to all my sponsors for their continued support and belief. Finally thanks to you for allowing me to share what I have to say.

Get lean and mean with FoodFight – a 100% vegan superfoods supplement great for workouts, recovery, and weight loss. No stimulants. No crashes. All natural. It’s green. Check it out at www.boomsuperfoods.com.