On Monday, World Extreme Cagefighting confirmed the remaining bouts for “WEC 52: Faber vs. Mizugaki” scheduled for Nov. 11 at the Pearl at the Palms in Las Vegas, Nev.

The Nevada State Athletic Commission has released the medical suspensions from WEC 50. Bantamweight champ Dominick Cruz must have his hand x-rayed or he can’t compete until Feb. 2011. Joseph Benavidez is out until October. Here’s the full list:

LAS VEGAS, Nev. – Fans of UFC have to be excited about the recent announcement made by President Dana White. White announced Tuesday on UFC.com that the UFC Fan Expo will now include grappling superfights involving Caol Uno, Hermes Franca, Fredson Paixao and Javier Vazquez. The event, which will be held May 28-29, will also … Read more

COLUMBUS, Ohio – Saturday night, following a first round submission loss to Javier Vazquez at WEC 47, 35-year-old Jens “Lil’ Evil” Pulver spoke at the post-fight press conference as if his time inside the cage was over. In his prime, Pulver beat the best of the best. In February 2001, he defeated Caol Uno to become … Read more 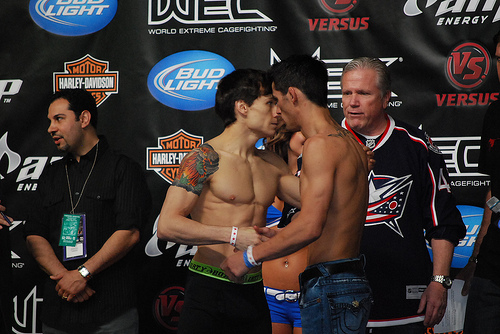 Las Vegas, NV (USA) – Two legendary names in the world of mixed martial arts return on Saturday, March 6  at Nationwide Arena in Columbus, Ohio in what is shaping up to be one of the deepest World Extreme Cagefighting® cards ever. WEC General Manager Reed Harris confirmed today that former bantamweight champion Miguel Angel Torres (36-2) will face top-ranked contender Joseph Benavidez (11-1), while former UFC® lightweight champion and featherweight star Jens Pulver (22-12-1) begins his trek back to the top with a bout against seasoned veteran Javier Vazquez (13-3).

“Joseph Benavidez and Miguel Torres both want a shot at the winner of the Brian Bowles-Dominick Cruz title fight,” Harris said. “So we expect these two to leave it all in the cage when they collide in Columbus on March 6. The same goes for Jens and Javier. Both guys are well-respected in this sport and both guys want to prove that they have what it takes to win the featherweight championship. It’s going to be a tremendous night.”

Joining Bas Rutten and Kenny Rice on this week’s episode of INSIDE MMA is Antoni Hardonk, Mike Brown, and Javier Vazquez. Also featured is the second part of Bas Rutten’s exclusive interview with Fedor Emelianenko.
Part 1

This edition of PRO MMA’s Amateur Spotlight shines upon a young 22-year-old up-and-coming fighter out of Rancho Cucamonga, Calif. named Jamar Ocampo. He is a morning BJJ instructor at Millennia MMA and an accomplished grappler under Javier Vazquez.

Since there is no amateur MMA in the Golden State, Jamar gained the majority of his combat experience in grappling competitions and Pankration tournaments all over Southern California. His current Pankration record is 10-1. Jamar had one full-fledged amateur MMA bout in Idaho and choked out his opponent in 52 seconds. His professional debut is set for September in King of the Cage.