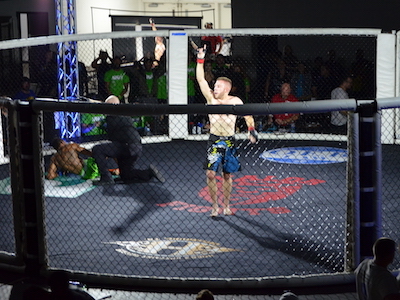 Valor Fights 46 took place on Saturday, Nov. 4 from The Fairgrounds in Nashville, Tenn. The card featured a pair of featherweight top contender fights as Jacob Kilburn stopped fellow Clarksvillian Edward Massey via knockout in a barn-burner main event, and Georgia’s Nathan Williams submitted Nashville’s Cromwell Stewart in the co-main event. Now Kilburn and Williams will face-off in the coming months for the Valor Fights featherweight championship.

Kilburn overcame a couple of tight submission attempts on his way to stopping Massey with a punch in the second round. And Williams delivered a big slam on Stewart before sinking in the fight-ending rear-naked choke in the first round of their co-main event matchup. Now two of the southeast region’s top 145-pounders in Kilburn and Massey will battle for Valor gold and that’s a fight no one who was present at Saturday’s event wants to miss.

Every fight on the professional main card ended in stoppage and there were several Muay Thai and professional grappling matches that took place as well. The event streamed live on FloCombat.

Here are the full results for Valor Fights 46: