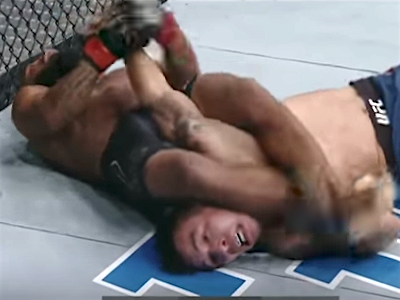 Demetrious “Mighty Mouse” Johnson successfully defended his flyweight (125 lb) title Saturday night in Las Vegas for a record-breaking eleventh time. Massive underdog and number three ranked flyweight Ray Borg showed some good wrestling and took Johnson down a few times, but ultimately couldn’t capitalize on it. Johnson dominated the striking and out-classed Borg in the grappling. In the fifth and final round Johnson went for a suplex, transitioned it mid-air to an armbar and forced Ray Borg to tap out. Borg fought against the armbar as best he could but Johnson adjusted and cranked it like a prybar in an oyster and he got the pearl of being the winningest champion in UFC history, as well as pulling off the slickest submission we’ve probably ever seen in the octagon.

If there’s been a submission in the UFC you think was slicker than that let us know in the comments below!