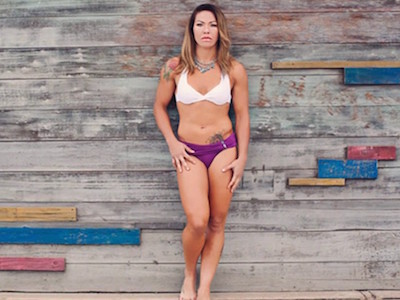 Cris Cyborg is in Phuket, Thailand right now having just served as a ring card girl during a Muay Thai event last night. That’s right, the UFC women’s featherweight champ took time off from slaughtering girls in the cage to support her man, Ray Elbe, as he made his return to professional kickboxing at the event for the first time in over three years. Take a look as a dolled up Cyborg makes her rounds around the ring.

Here’s highlights of Ray Elbe’s fight in which he scored a first round stoppage via body kick against Chang Thai. Ray’s Muay Thai record is 6-3 now. A BJJ black belt, Ray holds a pro MMA record of 25-11 and was a contestant on season 9 of the UFC’s The Ultimate Fighter reality series.