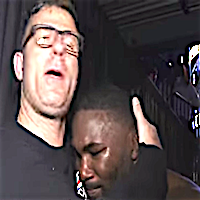 Light heavyweight knockout artist Anthony “Rumble” Johnson inexplicably tried to wrestle Daniel Cormier in their championship main event at UFC 210. Instead of relying on the powerful striking “Rumble” is known for, he got caught up in Cormier’s clinch game and it cost him the fight. In this new video you can see Johnson after the match as he breaks down in front of his coach Henry Hooft and apologizes for making the mistake. Johnson retired after the fight.