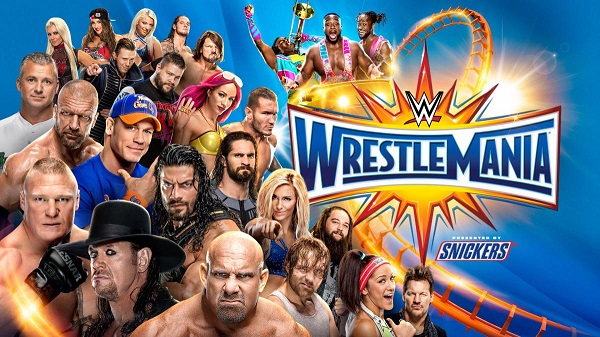 WrestleMania 33 takes place this evening (Sunday, April 2) from Camping World Stadium in Orlando, Fla. The action kicks off at 7 p.m. ET(4 p.m. PT) and Pro MMA Now will have live results and video highlights of all the action right here. Join us! Brock Lesnar will be facing Goldberg, Seth Rollins vs. Triple H, Roman Reigns vs. Undertaker and much more!

Watch a live stream of the WrestleMania 33 kickoff show below:

–Shane McMahon vs. AJ Styles – Styles dominates for several minutes before Shane starts landing some shots and uses several BJJ moves on Styles such as a rear-naked choke, armbar and more. AJ flips off the ropes right into a triangle choke from Shane. Styles picks him up for a face down slam. Referee gets accidentally taken out by Styles and Shane is also down. AJ grabs a couple metal garbage cans and they use those for a bit. Shane misses on a Shooting Star Press and is spasming in the ring. Styles comes off the top rope with a forearm for the finish. Winner: AJ Styles

–WWE United States Championship Match: Kevin Owens vs. Chris Jericho (c) – Owens catches Jericho in a Walls of Jericho submission. Jericho raises his hand to tap but is able to get free and eventually put Owens in the Walls of Jericho but he forces the break. Owens hits a pop-up powerbomb on Jericho but can’t finish. Jericho hits him with a Code Breaker but Owens gets a finger on the rope for the break as Jericho tries to pin him. Owens hits a pop-up powerbomb against the apron on Jericho out on the floor and this sets up the end. Winner: Kevin Owens

– WWE RAW Women’s Championship – Fatal Four Way Elimination Match: Bayley (c) vs. Charlotte vs. Sasha Banks vs. Nia Jax – It takes all three, Bayley, Sasha and Charlotte, to pin Nia Jax, but she’s the first to go. Charlotte eliminates Sasha next. Bayley with an elbow drop off the top rope sets up the finish. Winner: Bayley

–Non-sanctioned Match: Triple H vs. Seth Rollins – They said Rollins had the flu with 103-degree temperature earlier today. That’s really impressive for him to be out here, if true. And I wouldn’t want to be Triple H wrestling someone with the flu. Nope. Steph gets put through a table and Rollins finishes Triple H with a pedigree. Winner: Seth Rollins

–WWE Championship Match: Bray Wyatt (c) vs. Randy Orton – Randy RKO’s Wyatt out on the floor but can’t get the pin. Bray rallies back and looks to have it wrapped up but gets RKO’d for the finish. Winner: Randy Orton

–WWE Universal Championship Match: Goldberg (c) vs. Brock Lesnar – Lesnar hits three suplexes right away to start. But then he gets speared by Goldberg, then speared again outside the ring through the barricade. … Back in the ring Lesnar hits 10 German suplexes in a row and F5’s Goldberg for the finish. Winner: Brock Lesnar

–WWE Smackdown Women’s Championship Match: Alexa Bliss (c) vs. Mickie James vs. Becky Lynch vs. Natalya vs. Carmella vs. Naomi – Naomi with a killer entrance in a glow in the dark outfit. … Naomi submits Alexa Bliss for the win. Winner: Naomi

–No Holds Barred Match: The Undertaker vs. Roman Reigns – Jim Ross joins as guest commentator. Undertaker would not stay down. Got a good beating with a chair and is ultimately finished with a Spear. Winner: Roman Reigns … Undertaker laid down his hat and coat in the center of the ring after the match symbolically retiring in an epic final moment.