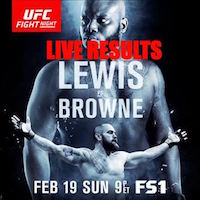 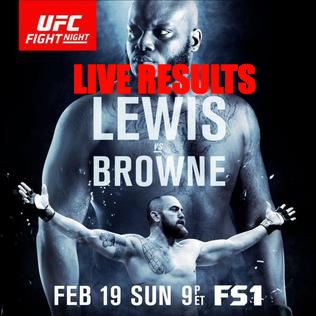 KO OF THE NIGHT CANDIDATE:

Round 1 – Sara comes out aggressive with punches, backs Mazany to the cage then takes her down with ease. Sara drops some punches and looks to take her back. Mazany gets up briefly but McMann still has a body lock and puts her back down. Sara locks on an arm triangle and quickly taps her out. As expected against a short notice replacement making her UFC debut.

Round 3 – Sicilia’s corner frustrated, telling him to get in there. Sicilia looking desperate now a bit. Lead right hook from Tucker, switch uppercut from Tucker. Right hook from Sicilia may have stunned Tucker. Sicilia presses him to the cage. Tucker backs out, lead right hook. Right from Sicilia as he’s hunting now trying to turn it into a brawl. Sicilia presses him to the cage, lands a couple inside but Tucker times a takedown perfectly. Tucker loses position and Sicilia is back up. Straight left from Tucker. High kick from Sicilia. Nice quick combo from Tucker. Front kick. One minute to go. Knee to the body, then a head kick from Tucker. Body kicks from Tucker now. He knows he hurt Sam. Beautiful performance from Tucker at home in his UFC debut. 10-9 Tucker.

Round 1 – Low kick from Hendricks. Again. Nice knee to the face from Hendricks as Hector gets inside. Left from Lombard, then a body kick. Overhand left counter from Hector. Low kick from Johny. Hector catches the next one and counters with a punch. They trade a couple shots inside. Low kick from Hendricks, Lombard ties him up briefly, Johny with a knee. Hector sprawls on a takedown attempt from Hendricks. Left counter from Johny. Hector catches a low kick and dumps Johny. But he’s right up, Hector ties him up from behind against the cage. Lombard presses him to the cage now in the clinch. Couple body shots from Lombard, goes for a trip and they trade punches. Back to the center before the bell. Close, I’d probably score it for Hendricks.

Round 3 – Overhand right from Lombard connects. Low kick from Lombard. Hendricks looks good and light on his feet. Much better movement at 185. Lombard ducks into another knee. Left connects from Johny. Left hook from Johny. Uppercut from Lombard inside. Jab from Hector. Nice left from Johny, low kick inside. Johny shakes off a takedown attempt after Hector catches a knee. Couple nice left hands from Johny. Another left from Johny, and another. Lombard catches a knee and Johny jump knee strikes with the other. Lombard takes him down but Johny is able to get right up. They trade kicks. 10-9 Hendricks.

Round 1 – Lewis misses with the first right, Travis with a counter punch, then a low kick. Body kick from Lewis. Low kick from Lewis. Front kick to the body hurt Lewis, holding his liver section. Browne targeting it now. Hard low kick from Browne. Lewis goes for a spin kick and jump kick. Hard low kick from Browne but he gets dropped with a right. Lewis tries to follow up but. Browne is up and hurts him with a body kick and he goes down now briefly. Both are back up and Browne landing low kicks. Another one, buckles the leg. Front kick to the body from Browne, another. Low kick from Browne. Lewis fires one back. Browne ducks a right, lands a low kick. Lewis misses another spin kick, lands a big right. 10-9 Browne.

Round 2 – Front kick from Browne, hard low kick. Another front kick. Head kick from Browne, but Lewis hurts him with a punch, backs him to the cage and Lewis is busting him up, lands two big uppercuts. He’s covering up but eating shots. Browne gets a body lock, goes for the takedown but lands on bottom. Lewis drops some elbows and pushes Travis back over as he tries to get up. Lewis postures up with elbows and big punches. Travis scrambles to his feet and pushes Lewis off. Lewis drops him with a big right that clips his forehead, Travis stumbles, falls and Derrick follows up with some more bombs and it’s over man. Holy crap that was insane and a hard fought win for Derrick Lewis. Wow that was crazy.