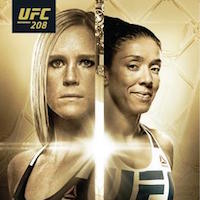 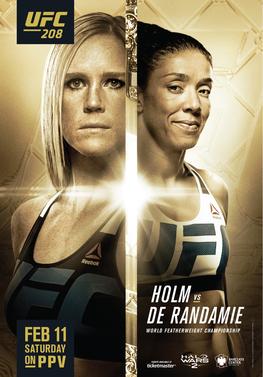 UFC 208 takes place on Saturday, Feb. 11 from Barclays Center in Brooklyn, N.Y. Holly Holm will challenge Germaine de Randamie for the UFC’s inaugural women’s bantamweight title in the main event. Both ladies had good runs at bantamweight but are now moving up to their more natural weight class. Holm comes in with a decorated boxing background (33-3-2, 9 KO’s) and de Randamie went unbeaten as a kickboxer (37-0, 14 KO’s).  In the MMA cage Holm has more experience, especially in high profile fights. Both girls have been submitted in MMA, but only de Randamie has lost by knockout, a TKO from Amanda Nunes back in 2013. Three of de Randamie’s six wins have been by KO, while Holm has finished seven of her 10 wins by KO. Despite Holm’s pedigree on paper, the oddsmakers have her a slight underdog at +110, while de Randamie is the favorite at -130. If your looking for an underdog bet this could be the one to take, though it wouldn’t be a huge boon.

Former middleweight kingpin Anderson “The Spider” Silva is also an underdog at +125 in his co-main event bout with rising star Derek Brunson -145. We don’t see Silva pulling this one off, so best save your money on this one. Silva hasn’t officially won a fight since 2012, and while Brunson did get stopped by a surging Robert Whittaker in November, he was riding a five-fight winning streak before that including KO wins over some very tough competition — Uriah Hall, Sam Alvey, Roan Carneiro and Ed Herman. Brunson is also eight years the junior of the 41-year-old “Spider”.

Here’s a wildcard pick for you. Big underdog Tim Boetsch +425 could upset Ronaldo “Jacare” Souza -550 and that would be a big payoff with $100 on Boetsch earning you $425. Boetsch had certainly been in a slump until he returned last Summer with a KO over Josh Samman. He then returned in November for a KO win over Rafael Natal. “The Barbarian” packs big power with half of his 20 wins coming by knockout. “Jacare” is the favorite for a reason, make no mistake. Sixteen of his 23 wins have been by submission and he’s knocked out some credible opponents as well in recent years — namely, Vitor Belfort, Yushin Okami and Derek Brunson. It’s not a certainty in this fight, but if Boetsch connects just right, it only takes one shot from “The Barbarian” to put the lights out.