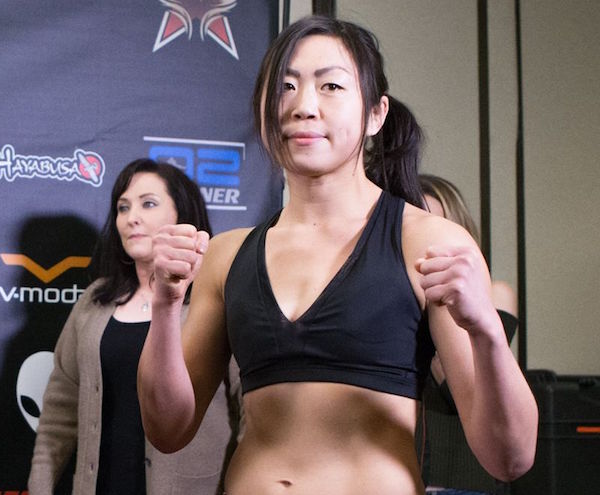 JacksonWink MMA fighter Celine Haga made her Invicta FC debut last week in the strawweight division at Invicta FC 21 in Kansas City. The match ended with quite a bit of controversy as Haga choked her opponent Amy Montenegro unconscious at the end of the final round as the bell sounded but the ref didn’t realize she was out and sent it to the judges where they awarded the decision to Montenegro. Apparently an unconscious opponent can still be awarded a victory in Missouri.

Celine took some time to answer a few of our questions on the bizarre ending to that fight and gave us some insight into her personal and professional life.

I started MMA very late…in beginning of my twenties. I had actually never ever heard of UFC or Pride…not even the word Jiu Jitsu was familiar to me. I started to train weights because I wanted to get stronger…I was 21-years-old and couldn’t do a single pushup…I’m very intense…so I decided to as well become a personal trainer…and compete in power lifting around 1 year after. I met this guy during a poker tournament who ended up becoming my boyfriend, and he used to do MMA. He showed me some cool techniques and I got hooked on it. I fell in love with bjj…then striking and ever since dedicated my life to the sport.

I used to train in a basement with the legendary Joachim Hansen, the former Pride fighter, Shooto and Dream champ, and five or six other guys…but it was not very structured…a lot of sparring I started to follow Japanese MMA and was a very big fan of Megumi Fujii. I decided to stop playing poker, take my poker savings and go to Japan to train with her and so I did. I ended up liking it so much I spent the next several years there and went back and forth from Norway to Japan.

Sacrificing so much for a dream and failing is very tough. (I had quit school, lost a lot of friends…just didn’t have time to hang out anymore…all my time got dedicated to training… quit and lost jobs, etc) Deep inside my heart I knew that I would never ever give up. MMA and fighting was the first thing I was thinking about when I woke up every morning and the last thing on my mind before I fell asleep. I loved it. It was not only my passion. It was the love of my life. I had problems dealing with it. I became very anti social. I felt very ashamed, but at the same time I got more motivated to prove every person who thought I was a failure that they were wrong.

My thoughts on fighter pay is that most fighters basically fight for free. A fight camp is not cheap; privates, gym fees, diet, medicals, pay managers, coaches, tax… not much is left at the end of the day. Being a full time fighter, you don’t have a retirement plan, you never know what’s going to happen. Your career can end when you least expect. A fighter union is absolutely needed.

You had a rocky start to your pro career but have now won nine of your last 12 bouts. How did you deal with the low points in your career? Any particular reason for this phase? How have your losses affected you?

I lost 11 out of my 12 first fights due to lack of experience, of course lack of skills, not enough knowledge of weight cut, how to train for a fight, deal with jet lag, etc. Many factors. It was very difficult mentally for me. I had problems dealing with it. I became very anti social. I felt very ashamed, but at the same time I got more motivated to prove every person who thought I was a failure that they were wrong. My losses have affected me on the record in a bad way since it makes the way to get where I want to be so much longer. But I learned a lot about myself and about other people. I know who stood by my side when I was losing, when I were struggling at my worst, and who still believed in me and supported me. And I learned how people treat you when you are on the bottom. The years of losing were a process of learning by doing and I gained so much experience, and as a fighter and a person I grew so much.

Your fight on Invicta FC 21 was very controversial. Despite choking out your opponent you lost the fight. Thoughts on the result and what is your next move?

I never felt so happy as I did when I walked into that cage. Despite dealing with some injuries right before the fight, I was happy I didn’t pull out, I had a blast!! Invicta FC treated me so good, the promotion is everything what I expected and more!! It was a magic moment for me stepping into that cage. The decision loss was very difficult for me, I remember what happened, I felt it and heard it and I know from the bottom of my heart that I choked out my opponent before the bell rang. Waiting for my opponent to wake up so she could get her hand raised was very painful for me to watch. Especially because I already have a very messed up record and another loss on the record is a huge setback for me. Some argue about me tapping to an armbar at the end of first round which in the video tape it looks like I’m doing after the bell rang. You can clearly see my thumb is down, she had pressure on my arm and I wanted to release it as soon as the bell rang so I could continue round 2. I definitely think a re-match has got to happen in the future. I will also state that I have appealed the decision to the Missouri commission.