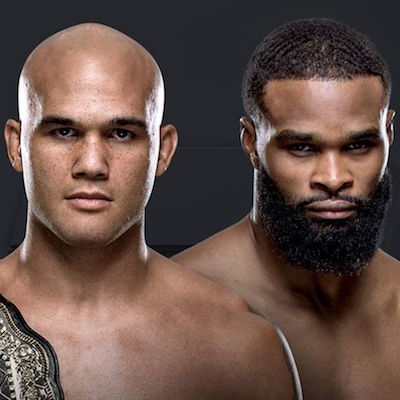 Here’s how you can watch the UFC 201 PPV main card live stream online.

ProMMAnow.com will provide live results of the entire card and round-by-round updates of the PPV main card. Stick with us here as the first fight kicks off at 7 p.m. ET / 4 p.m. PT.

Round 1 – After an initial exchange Serrano gets a takedown on Benoit. Benoit scrambles back up, drops Serrano with a right. Big slam takedown from Serrano as Benoit goes for his neck. Serrano can’t hold him down though and Benoit is back up and at it. Hard body kick from Benoit as he stalks Serrano. Hard leg kick from Benoit. Serrano shoots, stuffed. Under a minute to go. Axe kick from Serrano. Benoit pours it on at the end looking for the finish. 10-9 Benoit

Round 2 – Right hand from Serrano. Nice axe kick from Serrano. Benoit jumps on a guillotine but Serrano slams him hard and breaks free. After getting back to his feet Benoit defends another takedown attempt. Another big takedown from Serrano, and into side control. It looked like Serrano kneed Benoit in the head a few times while he was down, they say it was a hip strike, but looked like a knee to me. 10-9 Serrano

Round 3 – Serrano with a takedown straight away. Ref stands them up after a minute or so. Benoit stuffs the next takedown attempt and ends up on top. Serrano rolls for a takedown attempt but not even close. Hard body kick from Benoit, and he stuffs a takedown attempt. Benoit looking really tired. He initiates the clinch, roughs Serrano up with some dirty boxing then lands a big right. Close round, could go either way. Important to note Benoit took this fight on 10 days notice.

Round 1 – Rivera scores first with a punch combo. He lands a left hook. Uppercut and high kick from Perez. Hard leg kick from Cisco. Right straight. Inside leg kick from Perez, then a body kick. Right to the body. Perez catches a kick and lands a couple shots. They’re picking up the pace now, both landing, and a takedown from Perez but Cisco is right back up as Perez pushes him to the cage. Knee to the body from Perez. One two from Cisco as Perez buckles him with a leg kick. 10-9 Cisco Rivera

Round 2 – Perez drops him with a leg kick but Cisco is right back up before Perez can capitalize. Body kick from Perez, spinning backfist attempt grazes Rivera. They’re both swinging heavy and just missing. Nice body kick from Perez. Perez with a crazy shot but it’s stuffed. Rivera bleeding from the right side of his head. Leg kick from Rivera. Perez’s footwork is keeping him just out of range of Rivera. He’s able to land and get back outside. Rivera stalking. Strong leg kick from Rivera. Nice right from Cisco, short left hook. Hard inside leg kick from Perez and it visibly hurts Rivera as he puts his hands on his thighs for a moment. Takedown from Perez near end of the round. 10-9 Perez

Round 3 – Now it’s a firefight as they come out swinging like crazy, both guys get cracked and Rivera is swinging fists so hard he falls down. Perez gets a takedown and works the ground and pound from top leaving a puddle of Rivera’s blood on the canvas. Perez works the body as Rivera tries to convince the referee to stand them up. Rivera gets up with 30 seconds to go. Elbow on the break from Perez. Final 10 seconds but Perez won’t engage in the firefight and the bell ends it. 10-9 Perez

Round 1 – Ellenberger drops Brown with a big right in the first exchange. He tries to finish but Brown is able to get to his feet but eats some hard shots. Trip from Brown, and they’re back to exchanging. Another big right from Jake. Right from Matt stuns Jake. Matt looks recovered fully. Matt feels Jake may have burnt himself out a bit. Jake lands a big liver kick that puts Brown down. Jake follows up with big punches and Matt is out and it’s stopped.

Round 2 – Nice left jab from Rose to start. Right hand over the top.Thai plum and knees to the body and elbows from K. Rose pits her against the cage. Another knee to the body from K. Rose fires off a couple shots but more knees and elbows from K. Rose looking for the takedown but K landing some hard shots and defending well. Rose hanging on to her looking for the takedown, eats an elbow as they move to the center. Rose lands a one two. Couple big leg kicks from K. Rose drops her with a front kick, then a right hand as she stands. Rose shoots, stuffed, takes a knee to the body. Rose pits her to the cage. Rose gets some distance but eats a big right. Nice step in left from K, Thai plum and knees to the body from K wearing on Rose. She’s breathing hard. 10-9 Kowalkiewicz

Round 3 – Thai plum and knee to the body from K. High side kick from Rose. Hard leg kick from Rose. Nice right hand. K stuffs a takedown attempt. Rose slips or gets pushed down from a kick, then eats several knees to the body before K puts her on her back. Under 2 minutes to go. K landing punches while avoiding Rose’s submission attempts. Rose lands a couple up kicks as K postures up. Rose looks for an arm and they scramble. They swing it out in the final moments as they get back to their feet. 10-9 Kowalkiewicz

Karolina will face Joanna Champion for the title in a Polish vs. Polish strawweight championship match.

Round 1 – Woodley circling on the outside to start. Now Lawler on the outside circling. Feeling it out. Almost one minute in and no strikes yet. Tyron lands a right to the body for the first punch of the fight, he then presses Lawler against the cage looking for a takedown. Ref separates them quickly. Front kick from Lawler. Tyron backs Robbie up and lands a big overhand right hand that drops him, he follows up with several quick more shots and Lawler goes out! HOLY SH*T guys we have a new UFC welterweight champion.

This is only the second time Lawler has been stopped by strikes in his 15 year career.