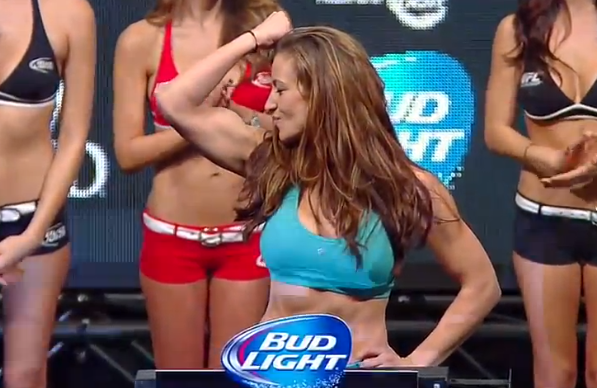 Miesha Tate finally has the UFC championship title that has eluded her twice before.

Tate, trailing on the scorecards in the final round seized her likely final opportunity to become champion and didn’t let go.

With just over two minutes to go Tate ducked under a lazy jab from Holm and went for a takedown. She was able to get Holm’s back, but not fully, and Holm knowing she was ahead on the scorecards looked to get right back up to her feet.

Holm worked her way over to the cage with Miesha Tate draped on her back like a lion on a gazelle that hadn’t eaten in weeks. Holms stood up with Tate on her back with both hooks in, and Tate managed to sneak her forearm under the chin. Holm realized she was in trouble and looked to throw Tate forward to get out of the choke, but Tate smartly kept one hook in so that when the flip was complete she would still have back control. All the way squeezing Holm’s neck like a lion would a gazelle to make sure the meal that had avoided her for months would come to fruition.

Holm tried one last ditch effort to fight Tate’s hands free of the choke, but it was too late and she went to sleep, crowning Tate as the new UFC women’s bantamweight champion.

No one has ever questioned the heart of Miesha Tate. She has an iron will, incredible chin, and isn’t afraid of going for it when the opportunity presents itself. The only problem is she had come up short each time the opportunity came, but not on Saturday night.