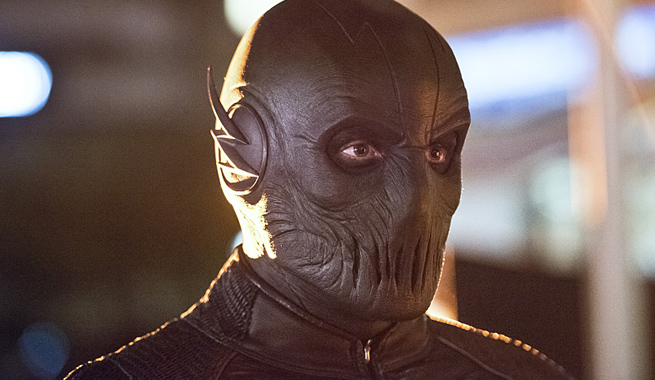 There are four solid identity possibilities for Flash season 2’s main antagonist named Zoom. He is fast, ruthless, and mysterious. The big question is who is he? He hails from Earth 2, a parallel dimension where everyone on Earth 1 has a doppelgänger. We have seen Harrison Wells return to the screen via this concept except right now he isn’t outright evil – just an amazing a-hole. He is definitely not Zoom so who is?

YOU HAVE BEEN WARNED

The obvious identity is Barry Allen aka The Flash himself. So far the doppelgängers have all been evil meta humans for the most part. Barry hiding under the Zoom mask wouldn’t surprise us one bit. Will they do it? No clue, but it is a distinct possibility that might just work. He hates Harrison Wells just like Harrison Wells hated him on earth 1.

The second most obvious is Eddie Thawne. There is no way they would miss a chance to being Iris’s love interest back, but not before having Barry and Iris hook up first. Imagine the impact of Zoom unmasking and the effect that would have on Iris’s feelings. Very likely this will become the big theory as we go on.

Third, and most unlikely is Joe West, Barry’s adopted father. He’s been there for him since his father was wrongly imprisoned. This might have an interesting dynamic to it, but not as much as the next on this list.

Zoom very well may be Barry’s biological dad from Earth two. This is the classic father vs. son conflict and that may be the reason for doing, or not doing this angle.

Finally, Zoom could be Oliver Queen. Imagine how epic that would be if Earth 2’s Oliver Queen showed up out of nowhere as the baddest speedster around.

These are our top five Zoom identity theories. Tell us yours in the comments section below!