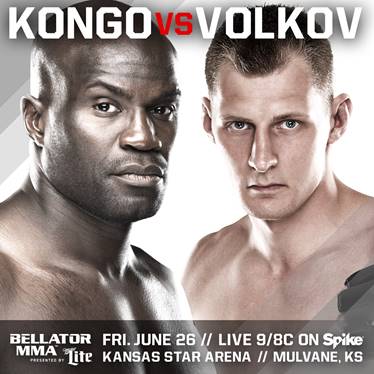 Bellator 139 takes place this evening from Kansas Star Casino in Mulvane, Kan., and is headlined with a heavyweight showdown between KO artists Cheick Kongo and Alexander Volkov. Lightweights David Rickels and John Alessio clash in the co-main.

Curran vs. Sanchez: Rd 1 — Sanchez the aggressor and both guys landed some good shots, Sanchez with some nice leg kicks and punches, and Curran with consistently better boxing, rocking Sanchez with a combo near the end of the round. Sanchez did land one nice punch combo. Rd 2 — Accidental headbutt and Sanchez gets cut over his left eye. Doctor checks him out and it continues. Curran scores a takedown and outboxes Sanchez for most of the round. He did get knocked down from a right by Sanchez though  he was already off balance and walking backward. Curran scored a final takedown before the bell. Rd 3 — Curran scores another takedown about a minute in and gets Sanchez’s back. Sanchez gets up but gets taken down once more and his back taken again. Sanchez gets up before the bell and they slug it out in the final moments. Curran won every round.

Schilling vs. Kato: Rd 1 — After taking a kick from Schilling, Kato takes him down and keeps him there the entire round. Schilling went for an arm at one point but was unable to get anything going. Kato wasn’t able to do much from the top but did control Schilling and mounted him. Schilling got up before the bell but was defending Kato’s attack. Rd 2 — Kato lands a left hand Superman punch on the button and Schilling is knocked stiff to the canvas. Kato follows up with one more but it’s unnecessary. No one saw that one coming, least of all Schilling.

Rickels vs. Alessio: Rd 1 — Rickels is getting the better of the standup and it looks as though the ref is about to stop the fight as he tees off on Alessio who has dropped to his knees — then Rickels in the heat of the moment hits Alessio with an illegal knee. Time is called as Alessio tries to recover. … Alessio says he can’t continue and the fight is called off.

Watch the prelims live in the player below.