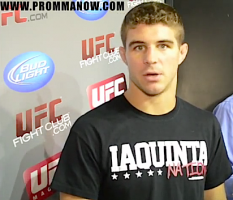 UFC officials have announced what should be an exciting fight for the upcoming UFC Fight Night 71 event that’s set to take place on July 15 in San Diego. TUF alum Al Iaquinta and Bobby Green have verbally agreed to fight in a pivotal lightweight matchup.

The event will take place at the Valley View Casino Center and will be headlined by a heavyweight scrap between Frank Mir and Todd Duffee.

Iaquinta (12-3) is coming off a controversial split decision win over Jorge Masvidal which was his fourth win in a row.

Green (23-6) is coming off a close decision loss to Edson Barboza in his last outing in November 2014.

This bout could vault the winner into a position to face a top of the food chain lightweight as both are ranked in the 10-15 range currently.

Stay tuned to ProMMAnow.com for more MMA news and coverage.