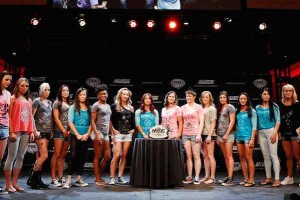 The TUF 20 Finale weigh-in’s have been completed and the fights are ready to go, but there were a couple of fighters that didn’t make weight. The main event fighters Carla Esparza  and Rose Namajunas had no problems making weight as they prepare to fight for the inaugural UFC women’s strawweight title. The entire TUF 20 weigh-in results are below:

*Oliveira originally weighed 147 and will be fined 10% of his purse.