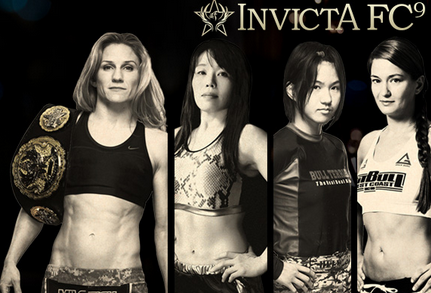 Invicta FC held weigh-ins today in Davenport, Iowa for their ninth event which features Barb Honchak defending her flyweight title against Japan’s Takayo Hashi in the main event. Honchak and Hashi were both on point, with Honchak weighing in at 124.4 pounds and Hashi at 124.8 pounds.

SPECIAL NOTE: We received a press release this evening stating there will be a special announcement during the Invicta FC 9 broadcast on Saturday. Hmmm what could it be? Cyborg’s first opponent at 135 pounds? UFC purchase of Invicta? Cyborg to the UFC?

*Maria Hougaard Djursaa will not re-weigh and forfeits 25% of her purse to Amanda Bell. Their bout will officially be contested at lightweight.

**Maegan Goodwin will not re-weigh and forfeits 25% of her purse to Kelly McGill. Their bout will officially be contested at featherweight.