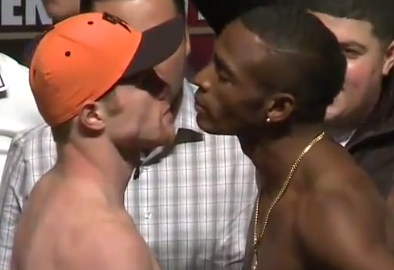 ProMMAnow.com will have LIVE results and round-by-round updates of all the action. The PPV card kicks off at 9 p.m. ET (6 p.m. PT).

Canelo suffered the first loss of his career against Floyd Mayweather, Jr. last September, but rebounded in March with a TKO win over Alfredo Angulo. Lara stopped Angulo in June of last year to win the interim WBA Light Middleweight title, then defended it with a unanimous decision over Austin Trout in December.

If you missed “All Access: Canelo vs. Lara”, you can watch both episodes here.

Perez vs. Herrera – Even after four rounds, according to Perez’s corner. Going into the 7th round Herrera ahead by two rounds, according to PPV unofficial scorekeeper. Nice slugfest last minute of round 9; Herrera was landing some hard left hooks. Perez making $100K, Herrera making $125K for this fight. Some great exchanges in the 12th round. Fairly close fight, but the edge should go to Herrera.

Lopez vs. Vargas – Vargas won rounds 2 & 3 big. Vargas battered Lopez so bad in the 3rd he couldn’t answer the bell for the 4th. Biggest win of Vargas’ career as he improves to 20-0-1.

Mares vs. Oquendo – “Stitch” Duran in Mares corner. Mares doing some good body work in round 3. Oquendo looking good in the 4th and Mares is cut over his left eye. Doctor checks him out and fight continues. Stitch Duran did a good job on Mares’ cut, and it held together in round 5. Unofficial scoring 49-46 for Mares after 4 rounds. Oquendo’s corner sounding desperate going into the 10th and final round.

Round 1 – Here we go… Nice left from Lara to get things started. Lara with nice movement and footwork. Nice right to the body from Lara. Left upstairs from Lara. PMN sees the round 10-9 Lara

Round 3 – Double jab from Lara. Canelo trying to cut him off as Lara circles the ring. Body jab from Lara. Left from Lara, then a one-two. Another one-two from Lara, and he’s gone before Canelo can return. Lara makes Canelo miss big at the bell. Lara’s movement has to be frustrating Canelo who barely landed anything this round. PMN sees it 10-9 Lara

Round 5 – Nice combo from Lara. Nice straight left snaps Canelo’s head back. Big 3-punch body combo from Canelo… powerful. More body work. Left hook to the liver, another. Right to the head. Left to the body and a right hook from Lara. Right uppercut inside from Canelo. Lara fires back. Lara trying to avoid the power of Canelo as the round winds down. PMN sees it 10-9 Canelo

Round 9 – Right counter jab from Lara. Jab from Canelo. One two. Big left to the body from Canelo. He’s faster and more powerful. Nice combo from Lara. Body work from Canelo. Lara bleeding pretty good now from a deep cut over his right eye. Canelo with more body shots. Nice right from Lara. Lara slips to the ground after a hook. PMN has it 10-9 for Canelo

Round 11 – Lara has out-landed Canelo by far with jabs in this fight. Body combo from Canelo but Lara fires right back. Jab from Canelo. Left from Lara. Right upstairs from Canelo scores. Lara with a light combo. Just not much on his shots. Left hook to the body from Canelo as he holds Lara from escaping. PMN sees it 10-9 for Canelo