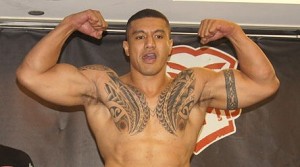 Soa “The Hulk” Palelei will look for his twelfth straight win when he faces Jared Rosholt at UFC Fight Night 43 on June 28th in Auckland, New Zealand. UFC officials confirmed the Heavyweight match-up this week.

Palelei (21-3) has knocked out three straight opponents since making his return to the UFC last year. “The Hulk” began by smashing Nikita Krylov at UFC 164 last August, then Pat Barry at UFC Fight Night 33 in December. Palelei’s most recent victim was South African Ruan Potts, who he stopped at 2:20 of the first round at UFC Fight Night 40 last weekend.

Rosholt (10-1) is riding a six-fight win streak and is 2-0 inside the UFC Octagon. Known as the winningest Heavyweight wrestler in Oklahoma State history, Rosholt made his UFC debut last November with a unanimous decision win over Walt Harris. He returned to action in April of this year when he scored a unanimous decision win over Daniel Omielańczuk at UFC Fight Night 39.

UFC Fight Night 43 is headlined with a Middleweight bout between James Te Huna and Nate Marquardt. The card now includes:

More bouts will be announced in the coming weeks, so stay tuned.