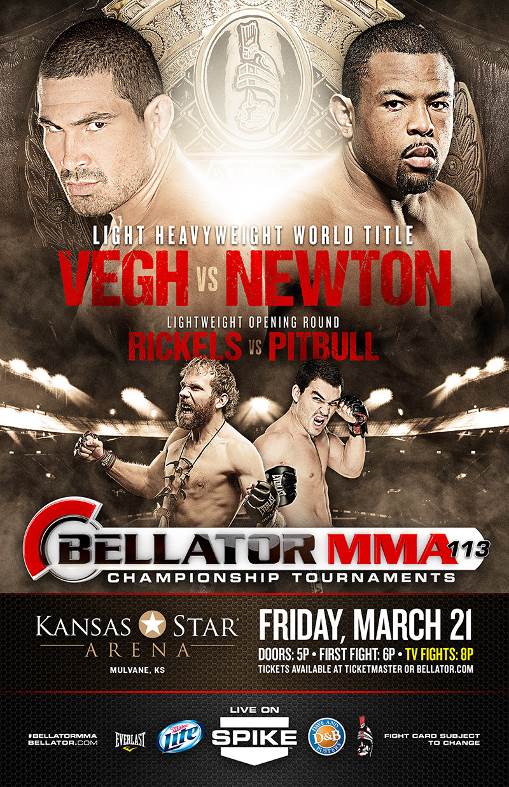 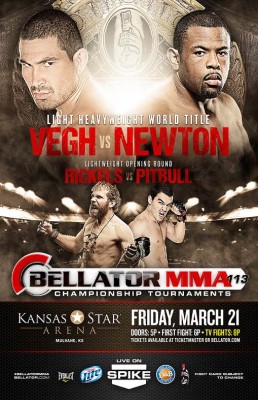 The event will broadcast live starting at 9 p.m. EST/ 8 p.m. CT on Spike TV.  The preliminary card will be streamed live and free exclusively on Spike.com starting at 6 p.m. CT. Tickets for the event are on sale Friday, January 10th and can be purchased at www.kansasstararena.com or by visiting the Kanas Star Arena Box Office.

“I’m ready for redemption,” Newton said. “I really wasn’t ready at the time in my career to be a champion. It wasn’t something physically, mentally, and spiritually I was prepared for. I’m a totally different fighter now, and this is my time.  I’m training hard, continuing to grow, and this is it. Now is the time. I’ve got a new contract with Bellator, Bjorn and I are happy, I’m going to be here for a long time and I couldn’t be happier. This is my home, and I’m going to be Champion.”

This will be Vegh’s first title defense after being out of action due to injuries. He holds an impressive 29-4 professional record and enters the fight with a nine-fight win streak and remains undefeated in the Bellator cage.

“I’m ready to get back into the cage, and defend my belt,” Vegh said. “Even though I won my last fight with Emanuel, I wasn’t happy with my performance in my last fight against Emanuel Newton. I was ready but things just didn’t go the way I planned. We are both different fighters since then, and it’s going to be a great fight.”

Kansas’s own David Rickels will fight in front of his home town faithful and face Brazilian knockout artist Patricky Pitbull in the Bellator Lightweight Tournament opening round.   After defeating J.J. Ambrose with a brutal knockout from Kansas Star Arena last season, Rickels plans on giving his fans another explosive fight, but will have to get past the heavy hands of Pitbull who has recorded seven victories via knockout.

“I am extremely excited to get back in the cage,” Rickels said. “I like to stay busy in the fight game and Bellator has done that for me. Pitbull is a great opponent for a war, and I am going to teach the Pitbull how to lay down.”

Stepping into the Bellator cage for the first time Rodrigo Cavalheiro will face one of the top submission artists in MMA in the polish phenom Marcin Held. Only 21 years-old and a former Bellator Lightweight Tournament Finalist, Held will look to his previous experiences to take down Cavalheiro on March 21st.

“My biggest advantages over Rodrigo inside the cage will be my ground game and overall professional experience,” Held said. “I am going to make a big statement in this fight. I want to show that I can be dangerous standing and when I submit my opponent.”

After making his Bellator debut against Patrick Cenoble in November, UK native Terry Etim will face Derek Anderson. Etim has his sights set on getting back in the top-five rankings where he was less than two years ago, he will need to hold off Anderson, who maintains an undefeated 10-0 professional record with seven first round finishes.

“I am extremely confident and excited to have the opportunity to be in a tournament,” Anderson said. “I saw Terry’s previous fight and I was unimpressed.”

The Bellator 113 tentative card thus far is below:

Stay tuned to ProMMAnow.com for more Bellator news and coverage.