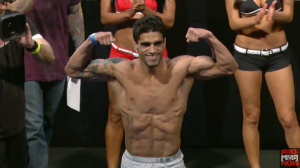 UFC officials confirmed earlier this week that Brazilian lightweight Thiago Tavares (17-5-1) failed his UFC on FX 7 post-fight drug test following a first round KO loss against Khabib Nurmagomedov on Jan. 19 in Sao Paulo, Brazil. Tavares tested positive for the anabolic steroid Drostanolone and has been suspended for nine months.

Tavares released a statement today regarding the failed drug test.

“I am surprised with the suspicion of doping announced by the UFC,” he said. “In 13 fights I was subjected to doping tests seven times and have never been accused of making use of any illegal substance. … I would never be able to use something that was not allowed.”

“My medical team is working on the investigation of all supplements or drugs used in and out of Brazil in recent months that may give false positive in this test. The analyzes are being done in specialized laboratories, by researchers at the Federal University of Santa Catarina, as well as all medical procedures are being investigated.”

“I have been a succession of events that want to shake up my career, such as deferred fights, injuries, etc, and I was prevented fighting last year. But I am confident that my career will not be shaken by this obstacle. Now we give our rebuttal to the UFC and we await results of the analyses so that measures can be taken.”

The 28-year-old Brazilian signed with the UFC in 2007 and is 7-5-1 inside the Octagon. As Tavares stated, due to injuries and other circumstances, it had been over a year since he had fought prior to Nurmagomedov. Now it seems it could be close to another year on the sidelines for the Florianopolis native.