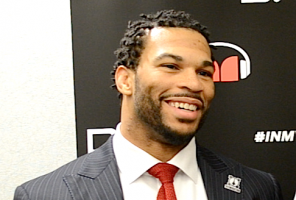 ProMMAnow.com (www.prommanow.com) caught up with Bellator Fighting Championships middleweight Brian Rogers (10-4) in Irvine, Calif., last week where he was checking out Bellator 85, the promotion’s debut card on Spike TV.

Rogers explained some of the challenges, especially with weight, that come with competing in Bellator’s tournament format and having to fight back-to-back fights so close together. He also discussed training with Jessica “Evil” Eye at Strong Style, and also what it’s like at TriStar Gym in Montreal, where he’s done some training.

Follow Brian Rogers on Twitter at @BRogthePredator and stay close to ProMMAnow.com for more on-scene coverage from Bellator 85.