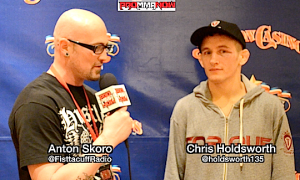 Holdsworth talked about getting dropped with an overhand right in the first round, recovering and fighting back to ultimately finish Shinn off in the second.

With the victory, Holdworth improved his undefeated pro record to 4-0. He spoke about his move to Sacramento, his continued success in the cage, the support system at Team Alpha Male and Newtrition4life that has helped him get to where he is and what lies ahead.