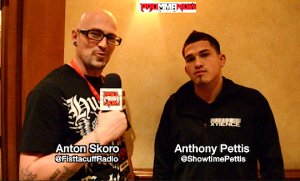 Pettis talked about coming into enemy territory and the nerves that go along with watching his brother compete on the big stage in his opponent’s home town. He also talked about his brother’s future and how far he thinks he might be away from signing with the UFC.

When Anthony Pettis, who has not fought since February, finally makes his long-awaited return he said he wants a match-up with Donald “Cowboy” Cerrone:

Pettis also discussed the “The Ultimate Fighter” coaching gig that never materialized, the promised title shot he never got and how these things are motivating factors to keep pressing forward. Finally, “Showtime”, who has been sidelined with a shoulder injury, surgery and subsequent staph infection, tells us when we can expect to see him back inside the UFC Octagon.