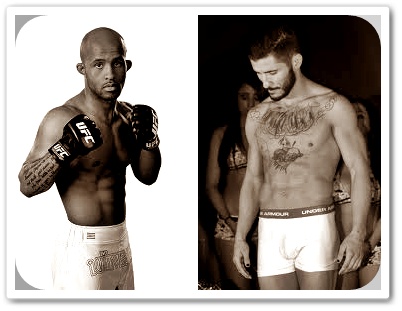 The UFC on FX 3 main event will feature a rematch between UFC flyweights Ian McCall and Demetrious Johnson. These two fought a few weeks back and finished in a controversial decision with Demetrious Johnson getting the nod from the judges. However, after further evaluation the judges scorecards were not tallied correctly and the fight was actually ruled a majority draw. The winner was to face Joseph Benavidez for the inaugural UFC Flyweight title, so this rematch will again be for the shot to fight for the inaugural title. The first fight was extremely competitive so let’s see how the rematch will go.

Johnson is the favorite at (-150) and McCall as the underdog at (+120). It’s a tough fight to call and could be a pick’em fight to be honest. I’d throw a few dollars on McCall at these odds for sure.

The first encounter between these two fighters saw the quickness of Johnson allow him to exploit McCall on the feet with his striking while landing the more significant strikes throughout the first two rounds. McCall got a couple of takedowns but didn’t do anything with them for the most part giving Johnson the edge in the first two rounds. McCall began to take control later in the fight as Johnson began to fade and McCall used his wrestling and ground and pound to score big points late in the fight, mainly in the third round.

Johnson commented in an interview with ProMMAnow this week that he had tried a new diet going into that fight and that could have been the reason why he faded late in the fight. If his cardio is on point I expect the second fight to go much like the first fight except McCall will not be able to dominant late in the fight. I also expect Johnson to mix up his wrestling a bit more as he only attempted four takedowns the entire fight the first time around. He should be able to win the exchanges on the feet with his speed.

McCall is going to have to go to his wrestling early and often in this one as he will not be able to gain a significant advantage on the feet. However, his size and strength could play a factor in controlling the smaller fighter while doing damage with ground and pound. I expect him to strike enough to set up his takedown attempts and go from there. He definitely needs to avoid being taken down by Johnson as he did in the first matchup.

I think Johnson can make more adjustments than McCall in the matchup, and if his cardio is on point like it usually is I think we’ll see more of what happened in the first two rounds of the initial contest.