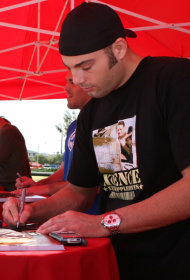 After a two-and-a-half year layoff due to injuries and medical conditions, welterweight Mike “Quick” Swick (14–4) will return to action at UFC on FOX 4.

The Ultimate Fighter season one competitor has been so long removed from action that many fans had began to wonder if his MMA career was over.

After losing to Paulo Thiago at UFC 109, Swick found himself continually hampered in making it to another fight in good health. Knee injuries and a stomach ailment continually forced him to pull out of booked fights.

Swick will be looking to pickup his first win since June 13th, 2009, where he defeated Ben Saunders at UFC 99.

Looking to give Swick an unceremonious welcome back to the cage is DaMarques Johnson (15-10). The Ultimate Fighter 9 finalist looks to get back in the win column after losing by submission to John Maguire at UFC on Fuel TV 2.

Johnson is 4-4 during his UFC tenure thus far. He is coming off a second round submission loss to John Maguire in April. Just prior to that he scored a first round knockout over Clay Harvison back in November 2011 at UFC on FOX 1.