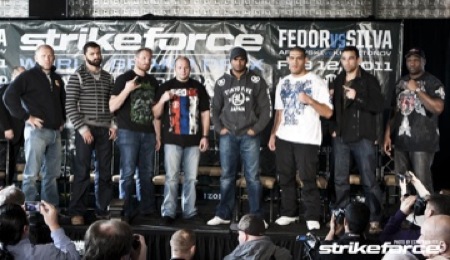 The Strikeforce heavyweight tournament final featuring Josh Barnett vs. Daniel Cormier is scheduled to go down on May 19 at HP Pavilion in San Jose, Calif. The following videos show the fights and the path that led to the finals.

It all started on Feb. 12, 2011, at the IZOD Center in East Rutherford, N.J. when Fedor Emelianenko took on Antonio “Bigfoot” Silva and Andrei Arlovski took on Sergei Kharitonov in the first round of quarterfinal bouts. Silva ended up taking out Fedor via TKO in the second round and Kharitonov knocked out Arlovski in the first.

Overeem out-pointed Werdum for a unanimous decision win and Barnett dominated Rogers, submitting him in the second round via arm triangle. In the alternates bout, Cormier put on a striking clinic, winning a very dominant unanimous decision.

The semifinals took place on Sept. 10, 2011, at U.S. Bank Arena in Cincinnati, Ohio. As an alternate, Cormier replaced Overeem after a disagreement between Overeem’s management company and Zuffa led to his removal from the tournament. Cormier went on to knockout out “Bigfoot” Silva in round one and Barnett submitted Kharitonov via arm triangle choke in the first round.