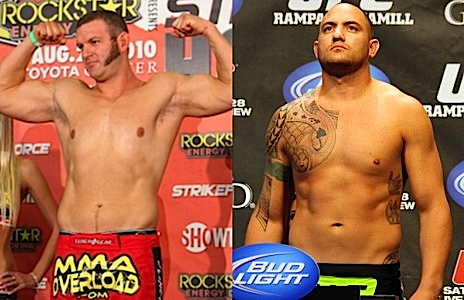 Former Strikeforce heavyweight standout Chad “The Grave Digger” Griggs will make his Octagon debut at the Bell Centre in Montreal on March 24, 2012, when he takes on undefeated Travis “Hapa” Browne at UFC 145.

Verbal agreements are in place from both fighters according to a Christmas eve report from UFC.com.

Griggs (11-1 MMA, 0-0 UFC) first caught the attention of the MMA world in his Strikeforce debut in Aug. 2010 when he brought the hype train of former WWE star Bobby Lashley to a screeching halt by stopping him via second round TKO at “Strikeforce: Houston”.

Following the win over Lashley, Griggs  fought twice more under the Strikeforce banner, scoring a first round TKO win over Gianpiero Villante in February and a first round submission (due to punches) win over Valentijn Overeem in June.

His next fight inside the Octagon was four months later at UFC 120 when he fought to a draw with veteran knockout artist Cheick Kongo.

Browne fought twice in 2011, scoring a first round knockout of the night win over Stefan Struve at UFC 130 in May and a unanimous decision win over Rob Broughton at UFC 135 in September.

A welterweight match-up between Rory MacDonald and Che Mills is also expected to take place at UFC 145. Stay close to ProMMAnow.com and our Upcoming Events page as more fights are announced for UFC 145 in the coming weeks.