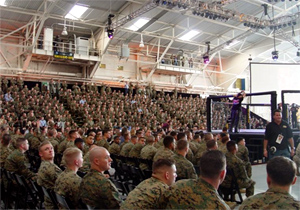 The popular UFC personalities will be there to give our U.S. military men and women a taste of home during this holiday season. The trio will sign autographs, pose for photos and host several MMA clinics with the troops.

Faber is a former WEC featherweight champion and one of the UFC’s top bantamweight contenders. He is coming off an impressive second round submission victory over Brian Bowles at UFC 139. Guida is a two-time XFO lightweight and Xtreme Kage Kombat champion and one of the UFC’s top 155-pound fighters. Palmer is a model and artist and former WEC ring card girl who transitioned to the UFC when they acquired the lighter weight classes late last year.