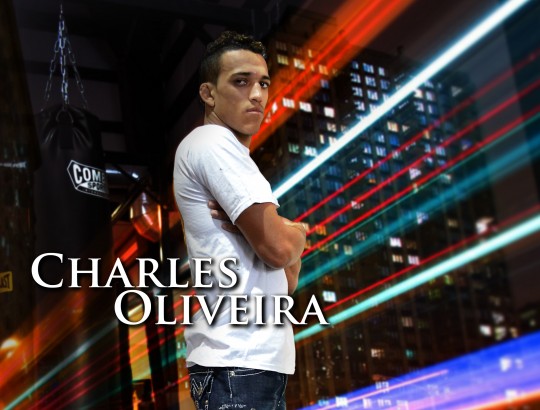 Things haven’t gone as planned for Charles Oliveira (14-1, 1 NC) in his last two fights with the UFC.

It all began this past December at UFC 124 when Oliveira’s 14-0 undefeated streak came to an end after he got caught in a submission by Jim Miller (20-2). Then in his subsequent fight against Nik Lentz (21-3-2, 1 NC), Oliveira was initially declared the winner only to have that ruling overturned to a no contest due to an illegal knee that went undetected by the referee

Now Oliveira hopes to turn things around with a major win over Donald “Cowboy” Cerrone (15-3, 1 NC) this Sunday at UFC Live 5 on Versus.

“Cerrone is a big name that has fought in some very big fights,” Oliveira said. “A win over him will really help my career and maybe put me back in the top 10.”

But a win over Cerrone won’t come easy, and while 12 of Cowboy’s 15 wins have come via submission, Oliveira doesn’t think that the former WEC title contender will try to take him down in the fight.

“I am comfortable anywhere the fight goes,” Oliveira said. “I do not see him attempting any takedowns. Cerrone is going to want to keep this standing. Cerrone is a very good kickboxer with a lot of kickboxing matches.”

Oliveira also said that he hasn’t let what happened in the Lentz bout affect the way he fights.

“The knee was an accident,” Oliveira said. “I am not a passive fighter. I am not cautious! I like to have a very fast pace and be very aggressive. I like to do high-risk moves for big rewards [and] I am always looking to finish the fight.”

As for those high-risk moves, Oliveira said that he has many more that he hopes to use in the future, and that he is looking forward to an exciting fight this Sunday.

“I am very excited about fighting Cowboy,” Oliveira said. “We have similar styles that will make for a very exciting fight.”

You can follow Charles Oliveira by visiting his Facebook Fan Page, and you can also see him training for his upcoming fight in this this UFC.com video.