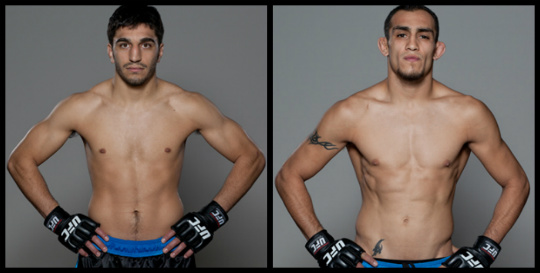 So the TUF 13 final matchup is set with Tony Ferguson taking on Ramsey Nijem to determine who the ultimate fighter will be for season 13.

Ramsey Nijem won all of his fights while he was on the show and brings an overall record of (4-1) with 2 wins via submission and 1 KO/TKO to his credit. Nijem has a wrestling background and works feverishly for the takedown and likes to work out of the clinch quite a bit. It seems as if his go to move is the rear naked choke.

Tony Ferguson won all of his fights while on the show and brings an overall record of (10-2) with 6 wins via KO/TKO and 3 wins via submission. Ferguson is a decorated amateur wrestler, winning All-American laurels twice and a national championship at Grand Valley State University. Ferguson also has a very good boxing skills as evident in the final fight on the show that got him to the finals.

A lot of time has transpired since the taping of the show which could possibly allowboth fighters to improve drastically during that timeframe. Ferguson has the edge in experience, has better standup, and has the edge in power. Nijem will need to close the distance and use the clinch position against the cage to take Ferguson down. If he’s unable to take Ferguson down, breaking from the clinch and throwing 2, 3, and 4 strike combinations could be ideal as well. Nijem could also look to time Ferguson’s kicks and take him down via that manner as well. Nijem is good at making his opponents give up their back, which he then locks in the rear naked choke for the victory. He simply needs to get this fight to the ground and go from there.

Ferguson needs to force Nijem to stand with him and use his footwork to create angles that will allow him to stay off the cage and clear of Nijem trying to close the distance. He may look to take Nijem down just to make him uncomfortable, and it’s probably something Nijem wouldn’t expect after seeing the boxing clinic Ferguson put on in his last fight on the show. Ultimately, I think Ferguson’s experience and overall skillset will be too much for Nijem and Ferguson wins via TKO to become the next ultimate fighter.