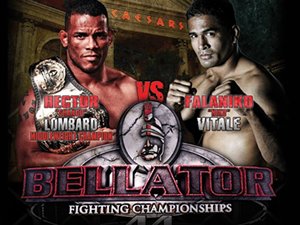 One of the main card bouts, Anthony “Cheesesteak” Morrison vs. Bryan Goldsby, has been removed from the card after Morrison came in more than 10 pounds over the bantamweight limit.

In all fairness, maybe Morrison just thought he had signed up for a featherweight bout.

In the night’s main event Bellator middleweight champion Hector Lombard will put his reputation on the line in a non-title fight against veteran Falaniko Vitale, who is making his Bellator debut.

The official weigh-in results are as follows:

*The Anthony Morrison vs. Bryan Goldsby fight has been removed, as Morrison failed to make weight