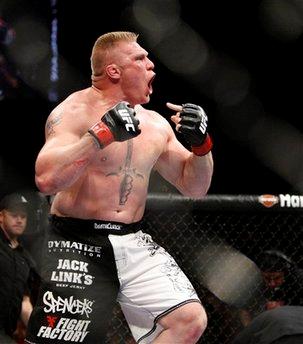 When it rains it pours. Former UFC heavyweight champion and coach on this season’s The Ultimate Fighter, Brock Lesnar has pulled out of his title eliminator UFC 131 bout with Junior dos Santos scheduled for June 11 in Vancouver.

Apparently, Lesnar’s diverticulitis has once again reared its ugly head. He commented:

“I want to thank the UFC, I want to thank Mr. White and I want to apologize to Junior dos Santos and Spike TV. This is an unfortunate situation for me. I dodged a bullet about two years ago with diverticulitis, at that time not knowing what the problem was. … Diverticulitis is something that never goes away. It’s something I’ve dealt with since the first occurrence and I’ve been battling it. … It didn’t allow me to train to my full capabilities. I was forced to make a decision to go back to the doctor this week. It wouldn’t have been fair. My health is No. 1, my family is No. 1 and it was a hard decision. I’m choked up about it and there’s nothing I can do.”

Although this spoils the whole Ultimate Fighter build-up, thankfully the UFC has a very worthy replacement in Shane Carwin who will take Lesnar’s spot against dos Santos.

According to Lesnar, he has been feeling ill for the last three months, has been on antibiotics and has spent many hours at the Mayo Clinic this week talking with doctors. He insists though this is not the end, he will not retire and will be back. Let’s hope so.