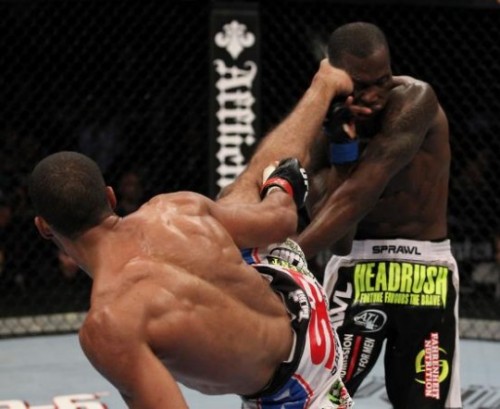 Barboza came out victorious but it was a competitive bout, and it turns out that Barboza had hand and knee injuries that may have hampered his performance. However, Barboza knows that fighting hurt is part of the game and played down the impact that his injuries might’ve had.

“My camp only mentioned them and I don’t want them to get blown out of proportion,” he told ProMMAnow.com. “I think it is rare that any fighter makes it to a fight 100 percent. If he had a tough camp, there will always be nagging injuries. Did the injuries effect my game? Sure. But I won’t be the last MMA fighter stepping into the cage not 100 percent. It is part of the job description. In fact, I think in the job description that ZUFFA gave my manager it said, ‘Must be able to fight hurt, do you want to be a F’n MMA fighter or not?’” (laughs)

In the first round, Barboza caught Njokuani clean with a thumping right hand that hurt his opponent. Barboza wasn’t able to capitalize as much as he would’ve liked but understood that getting overaggressive would’ve been dangerous.

“I caught Anthony with a heavy right early and I know it rocked him,” Barboza said. “I also know that he is an experienced fighter. So he was rocked for sure, but he wasn’t totally out on his feet. When a very good fighter and striker like Anthony is hurt, you have to be very careful not to rush in to finish prematurely. That is where you see a lot of guys get caught. He was hurt and I was not surprised he recovered so quickly. Muay Thai guys are like that. Being rocked on your feet is part of the sport.”

As the fight wore on, Njokuani had some success, mixing in punches and kicks from the outside and staying out of range. Asked whether the injuries slowed him down, Barboza insisted that it was Njokuani’s movement that created the problems.

So even though Barboza has pretty high expectations, he knows that even his striking will need time to develop.

“I felt fine in the fight,” he said. “Anthony was just very fast and they did their homework for the fight. I am still learning and growing as a fighter. I came to MMA as a Muay Thai fighter, not an MMA striker. The transition to the game takes awhile. I feel very fortunate to have Coach Ouali as my striking Coach, as he has given me great direction in my transition to MMA striking. Converting from Muay Thai fighting to MMA striking is like a wrestler converting to BJJ for MMA….it takes time and they are different games with different details if you are going to compete at the highest level in the world.”

Barboza also showed signs of his evolution as a fighter, mixing in a few takedowns that Njokuani couldn’t fend off. It’s the kind of variety he wants to add to his game to set up some ground-and-pound and also keep opponents off balance on the feet.

“I have been working on my takedown since I started training for MMA,” Barboza said. “I want to be a complete fighter. So, yes, you can expect to see more of those in the future, for sure. It also lets me open up my striking game, as my opponents will have to deal with my level changes and drop their hands…..it gives me the chance to KO them perhaps.”

With the third round fairly close, Barboza ended things on a perfect note, clocking Njokuani with a spinning heel kick. Upon returning to his hotel room, Barboza got the good news about his fight bonus.

“My manager told me,” he said. “Of course I was very happy. The UFC is very generous with their bonuses and of all fighters who fought that night, sure, I think I deserved it. I also have to thank Anthony as well. He allowed us to have a great fight by constantly bringing the fight back to me.”

Next month Barboza will make a trip back to his hometown of Nova Friburgo, Brazil, to help in the relief effort from the devastating mudslides that hit the area. ProMMAnow.com will get an update from Edson after his trip.