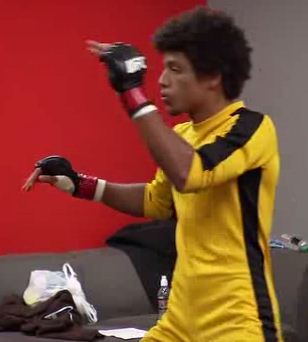 “Be like water making its way through cracks. Do not be assertive, but adjust to the object, and you shall find a way round or through it. If nothing within you stays rigid, outward things will disclose themselves.” -Bruce Lee

This is just one of the many quotes from perhaps the greatest martial arts action hero of all time and legend Bruce Lee.

The name literally means “return again”, and if the legend holds true that he is to return again, you may very well find him inside the Octagon in the fighting form of 22-year-old Alex “Bruce Leeroy” Caceres this weekend as he take on Mackens Semerzier at UFC Fight Night 24 in Seattle.

Caceres (4-2) as you may remember was the colorful character that came out in a yellow jumpsuit on last season’s “The Ultimate Fighter: Team GSP vs. Team Koscheck”, prompting a big smile from even top dog, Dana White.

Caceres had submission victories over Paul Barrow and Jeff Lentz on the Spike TV reality show but did not make it past Micheal Johnson, losing to him in via unanimous decision in the quarterfinals.

After the show, Caceres headed to TriStar in Montreal to work with head trainer Firas Zahabi who was one of the world-class coaches Georges St-Pierre made available to his team on The Ultimate Fighter.

Caceres was there preparing for his UFC debut at the TUF 12 Finale against Team Koscheck’s Nam Phan when he suffered a shoulder injury and had to pull out of the bout scheduled for Dec. 2010.

“I was actually looking forward to that fight. I felt more ready for that fight than I did for a lot of my other fights,” Caceres told ProMMAnow.com’s Susan Cingari during a recent visit  to the Renzo Gracie Academy in New York.

“And why I say that is because you never know how you are until like you get there. And at that point, I felt that I was peaking for that fight and then my injury got me down. I was really mad at myself for awhile, just for getting injured. But, there are some things you can’t control. Just have to roll with the punches I guess. But, I was definitely looking forward to fighting Nam.”

Caceres talked about some of the things he worked on while at TriStar.

And much like the foundation of a house that is being built floor by floor, brick by brick, from the ground up, the talented trainers at TriStar were building Alex up.

“Alex is a very athletic kid, he’s got a lot of heart and a lot of physical talent, he has the heart to fight… He’s very game and I think he’s gonna go a long way,” said Zahabi.

Now what Caceres has been looking forward to is just a day away in the form of 30-year-old “Mack Da Menace” Semerzier (5-3).

A WEC veteran, Sermerzier was undefeated prior to 2010 but has fallen on hard times of late after losing three in a row.

Caceres is coming into the fight with yet another lethal weapon in his arsenal in the form of John Danaher, who is considered one of the best BJJ teachers in the game and helps train such fighters as GSP.

Caceres has been training with Danaher for the past month and commented on the respect he has for the BJJ master.

“Danaher has me working a lot on my Jhu Jitsu and he’s the man so whatever he says I am going with,” Caceres stated proudly. “Basically playing follow the leader. New York is really where it’s at and life is good.”

Yes life does seem to be very good for this young talented fighter. Look for him to walk into the cage Saturday with an improved game, sporting a new look (he has a new haircut) and a new attitude.

“I feel like I have found my place in the sport, you know. I have surrounded myself with the people I want to train with and I am very comfortable,” Caceres said.

The songs fighters walk out to often hold some meaning for them. Cain Velasquez likes his mariachi music, Stephan Bonnar gets down to Bob Dylan and Jon Fitch often prefers a little Johnny Cash.

Regarding his choice of music for this Saturday, Caceres said, “I haven’t really decided yet. I’m leaning towards a song from the Japanese band ‘The Pillows’. They have a pretty epic song that makes me feel like a hero.”

A hero… hmm, isn’t what that what Bruce Lee was? Well it looks like the legend may indeed live on.