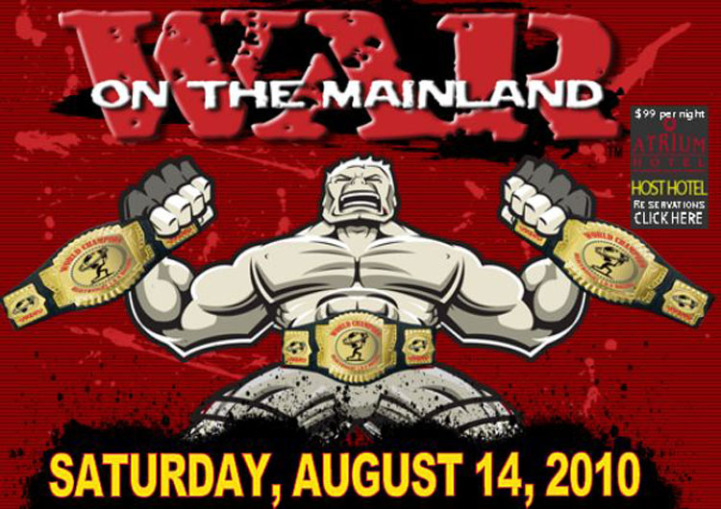 On Saturday, Powerhouse World Promotions will host “War on the Mainland.” The card will feature several UFC veterans and two former UFC champions. In the main event, Tim Sylvia will face off against Paul Buentello. The event will be available through pay per view at WarontheMailand.com.

Tim Sylvia vs. Paul Buentello
This fight is truly a crossroads match up. The winner will take the an important step toward righting their career. The loser will be basically done as a top-level heavyweight. The MMA populous basically gave up on Sylvia after Ray Mercer dramatically stopped him. Since then he has put together back-to-back wins against over matched opposition. On the other hand, Buentello has not looked impressive since his destruction of Kirill Sidelnikov. Look for Sylvia to use his reach to keep Buentello out of striking distance and take a decision.
Pick = Tim Sylvia

Jason Lambert vs. Allan Goes
If you only watched early Pride events, then you would think Goes is a star. However, as we all know the sport has evolved. Lambert should be able to get top position and avoid submissions en route to a decision. Lambert has had trouble recently, but Goes have not fought in over three years.
Pick = Jason Lambert

Thales Leites vs. Matt Horwich
It might take Leites a while to lose the stink of his lackluster loss to Andersson Silva at UFC 97, but he is doing his best. He is 3-0 since leaving the UFC including impressive wins over Dean Lister and Jesse Taylor. Horwich relies on his top-position grappling game, but here he will be easily handled on the mat. Since the fall of the IFL, Horwich is 1-5.
Pick = Thales Leites

Jens Pulver vs. Diego Garijo
Since moving to the featherweight division in 2007 Pulver has gone 1-5. Here the promoters are attempting to throw him a softball by match him with Garijio who is only 4-1 as a professional. Despite his paltry record, he can still stand and bang. Pulver never had the strongest chin in the world, and it has only gotten worse with age.
Pick = Diego Garijo

Terry Martin vs. Jorge Ortiz
Yet another fight on this card in which both fighters really need a win. Terry Martin should be able to get takedowns and win the fight from there. “The Naked Man” has struggled with wrestlers in the past.
Pick = Terry Martin