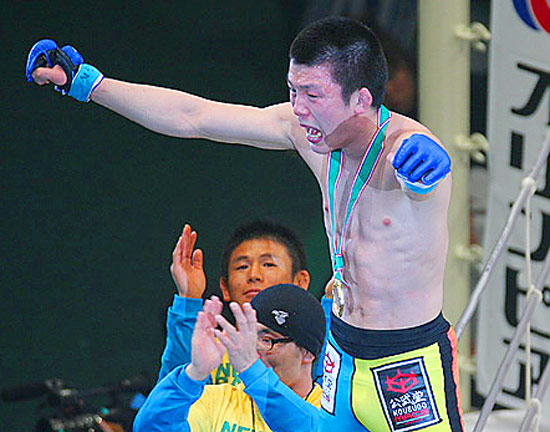 Golden Glory, the management and training entity behind fighters like Semmy Schilt and Alistair Overeem, have 2010 Ultimate Glory. The three-event series will feature an eight-man MMA tournament and an eight-man kickboxing tournament. The first event is scheduled to take place on Oct. 16 in Amsterdam.

HeadKickLegend.com reported both tournaments on Friday.

The headlining name has to be Dream lightweight champion. Aoki will move up to welterweight for the first time since losing to Hayato Sakurai in the first round of Dream’s welterweight tournament. Since that loss, Aoki is 4-1 including a win over Tatsuya Kawajiri and a loss to Gilbert Melendez for the Strikeforce lightweight title.

Dream’s welterweight champion, Marius Zaromskis will also participate in the tournament. The Lithuanian defeated Seichi Ikemoto, Hayato Sakurai and Jason High to win the Dream belt. However, since winning the title he is 1-2 with back-to-back losses to Nick Diaz and Evangelista Santos.

Daley was one win away from a shot at welterweight-kingpin Georges St. Pierre. However, his loss and post-fight sucker punch against Josh Koscheck cost him both the shot and his job. The British fighter returned to action last weekend and picked up a devastating victory over Pride veteran Daniel Acacio. Daley holds victories over Martin Kampmann, Dustin Hazelett and John Alessio.

Bahadurzada will be moving down to welterweight after spending most of his career at middleweight. The Afghan-born fighter had a brush with the big time when he took part in the Sengoku middleweight tournament. Eventually champion Jorge Santiago eliminated him in the second round. Bahadurzada last fought at Glory 11th Anniversary taking a majority decision over Robert Jocz.

Despite currently coming off back-to-back losses to Tim Kennedy and Dan Hornbuckle, Thompson holds several quality wins. Over the course of his career, he has scored victories over Daley, Chris Wilson and Eddie Alvarez.

Carneiro fought for the UFC five times between 2007 and 2008. The promotion released him after back-to-back losses to Kevin Burns and Ryo Chonan. Since then, he has gotten back on track with a decision victory over Vale Tudo pioneer Jorge Patino at Shine Fights 2.

Gonzalez and Depret round out the field with a combined record of 19-7.

For more information of the accompanying kickboxing tournament check out HeadKickLegend.com